Jim enjoyed meeting with artists and speaking with them about their work and how they might collaborate. It was fun to take one of his own creations and see how another artist would approach representing it. Jim took advantage of some down time between shooting and editing his Muppet Valentine Show to meet with Ivan Biro, a New York based fine art sculptor and fashion and toy designer to commission a sculpture of Ernie. At the same time, thinking about the promotional materials for his TV special, he met with illustrator and poster artist, Ted Coconis. Coconis’s illustration work for the popular 1971 children’s novel, Summer of the Swans (by Betsy Cromer Byers) was much lauded and his iconic poster for the film version of Fiddler on the Roof the same year made him sought-after in Hollywood. He was a good choice – his illustration of Mia Farrow with the giant Thog captured the charm and playfulness inherent in the special. And having such an important artist do the job underscored for Jim the recognition represented by having a show on a major television network.

A dozen years later, Jim went back to Coconis to design the poster for Labyrinth. While the pairing of Sarah with Jareth was very different from Farrow and Thog, being able to embody the ambiguous relationship in a single image while hinting about the spirit of the entire production took a specialized talent, something Coconis could bring to the project. 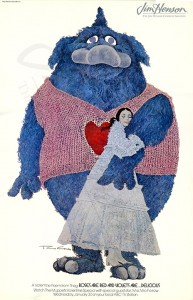 Poster art by Ted Coconis for The Muppet Valentine Show, 1974. 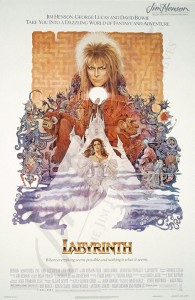