Jim enjoyed entertaining and hosted parties throughout the year. Some were masked balls for a wide range of guests and others marked the beginning or end of a production and served to cement the feeling of community among the productions’ participants. The holiday parties, usually held in multiple locations depending on where Jim’s company was working at the time, celebrated the season and provided a way for Jim to let his staff know how much he appreciated their work over the course of the year. In 1985, he hosted a fancy dress party in London for his UK group on December 11th, flew to Toronto to celebrate with the Fraggle Rock team on the 16th and then back to New York for festivities with his staff there. Jim had a few days off to enjoy Christmas and then attended the biggest New Year’s Eve party in the world with Kermit – the celebration in Times Square. 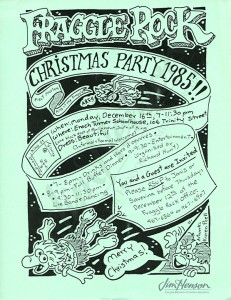 Invitation for the Fraggle Rock holiday party held in Toronto December 16, 1985 with artwork by Karen Prell.