Jim met renowned puppeteer Burr Tillstrom at the 1960 Puppeteers of America festival in Detroit. Given that Tillstrom was the most successful puppeteer working on television at the time (with his show, Kukla, Fran and Ollie), it was quite a thrill for Jim. They become good friends and performed together, along with Shari Lewis (Lambchop) and Bil Baird (Davey Jones’ Locker, Lonely Goatherd, etc.), at the Kennedy Center in Washington in 1980. In 1983, Jim helped organize a tribute to Tillstrom at the Museum of Broadcasting and when Tillstrom passed away in 1985, Jim participated in his memorial service. 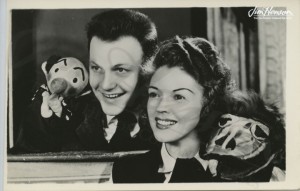 Burr Tillstrom with Fran Allison and his puppets, Kukla and Ollie. 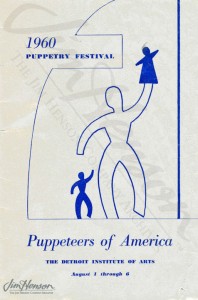 Program for the 1960 Puppeteers of America Festival in Detroit. 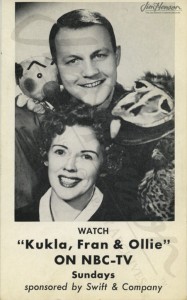