Even before The Muppet Show started airing in Germany in 1977, the Muppets had a huge fan base there. Thanks to the popularity of Sesamstrasse, the German Sesame Street co-production that started in 1973 and its related magazine, Kermit was well-known and audiences were predisposed to loving his cohorts. Almost immediately, a German version of The Muppet Show record album was produced with the singing dubbed into German (“Deutsche Originalaufnahmen”.) Soon, the broadcaster there was asking for a way to make the show seem almost home-grown. According to Muppet Show head writer Jerry Juhl, when The Muppet Show was sold to the German television market (as Die Muppet Show), they wanted to have a German guest star. Jim made a deal to tape a segment with German singer Mary Roos and used it to replace a segment of the season-one episode guest starring Twiggy. In 1978, to further illustrate the Germans’ appreciation for Jim and his work, he was awarded Die Goldene Kamera, an honor given by Horzu magazine to performers and professionals in the television industry. 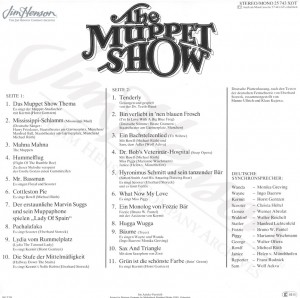 The voice credits for the German version of The Muppet Show album, 1977. 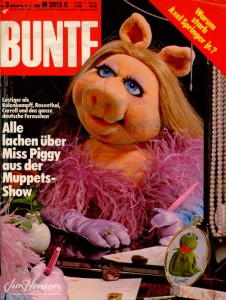 Miss Piggy on the cover of the German magazine, Bunte, 1980.