Muppet fans might think that Time Piece was a quirky and unusual project for Jim, but this short, abstract, live-action film was central to much of what he was doing in the 1960s, parallel to his work with puppets on television and in advertising. Jim’s interest in filmmaking was wide-ranging and led to many non-puppet projects that explored the intersection of ideas, music and imagery. These included animated fables, like Alexander the Grape, fast-paced industrial sales films, like Paperwork Explosion, and more personal expressions of appreciation for family and nature, like Run, Run.

Jim’s restless imagination went to work thinking up comic Muppet bits for television, but he had plenty of energy for these other projects as well. Time Piece was just the start – by combining his experience for these more ambitious, experimental film efforts with what he learned from his Muppet television and film work, Jim was able to produce his cinematic masterpieces, The Dark Crystal and Labyrinth in the 1980s.

Learn more about Time Piece and its distribution. 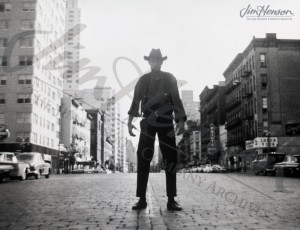 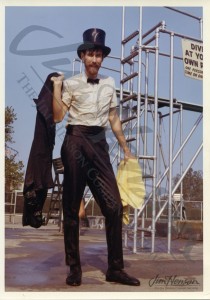 Jim after shooting the diving board scene for Time Piece, 1964.

This entry was posted in 12-December '65, 1965, Time Piece and tagged Labyrinth, The Dark Crystal, Time Piece. Bookmark the permalink.