Long before Kate Moss made waif-like models all the rage, Lesley Hornby, who went by the descriptive name Twiggy, took the fashion world by storm. In direct contrast to the Marilyn-esque curves popular in the 1950s, Twiggy was androgynous and extremely thin and one of the most popular models in the swinging ‘60s. She got her start in the UK, but her fame spread and by the 1970s, she was also performing as both actress and singer. Given her range of talent and visibility on both sides of the Atlantic, it’s not surprising that she was tapped as a guest star during the first season of The Muppet Show.

In the show, Twiggy sang the soulful Beatles song, “In My Life” and later, showed her versatility performing a country and western number with the Googalala Jubilee Jug Band, “Nobody’s Business But My Own.” In perhaps a nod to her English roots, Twiggy helped present A.A. Milne’s poem, “The King’s Breakfast” with Gonzo, Muppy and an assorted cast of characters.

As part of the promotion for The Muppets Take Manhattan in 1984, Kermit and Miss Piggy were interviewed by Twiggy and her Broadway co-star at the time, Tommy Tune for Interview magazine. In a familiar and comfortable give and take, the four discussed the film, Broadway and their respective childhoods. When Twiggy tried to steer to talk about the relationship between the Frog and the Pig, Kermit changed the subject. But Miss Piggy was undeterred. She explained, “I would like to say one last thing about this. In public, he does protest, but in private there’s really no protestation. It’s joy, unbridled joy.” 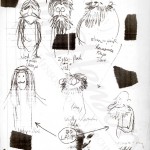 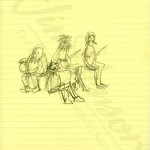 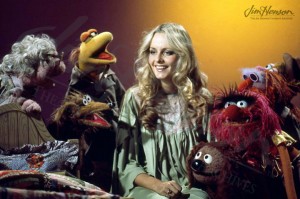 Twiggy and friends on The Muppet Show, 1976.