Although he had, for the most part, stopped making television commercials, Jim and his team, between 1975 and 1978, made more than twenty spots for a European Pepsico product called Mirinda. This was not the first time that Jim’s characters were asked to sell soda. In 1966, Jim was hired by the Nehi Royal Crown Corporation through D’Arcy Advertising in Chicago to make four twenty second commercials for Royal Crown Cola (two of which would highlight their “Sav-A-Seal” campaign.) Using his successful formula of playing an enthusiastic character against a curmudgeon, Jim designed Nutty Bird and Sour Bird for the campaign. This was despite his contract’s stipulation that he would use existing characters in making the commercial.

On August 24th and 25th, 1966, Jim went into the ABZ studio (which Jim was considering buying at the time) with Jerry Nelson, Frank Oz and Don Sahlin to film the four spots. The relationship of the two birds was similar to the one Jim and Frank would develop for Ernie and Bert three years later. Nutty Bird’s exuberant enthusiasm was contrasted but not deflated by Sour Bird’s blasé pessimism. When Nutty Bird energetically plays his guitar, singing the praises of Royal Crown Cola, Sour Bird looks at the camera and says, “I hate folk singers with a message.” After more from Nutty Bird, Sour Bird in exasperation asks, “Is that the end?” Undeterred, Nutty Bird crows, “There’s no end to the praises I sing of Royal Crown Cola.” You could almost see Sour Bird rolling his eyes.

Even though he wasn’t being paid to design new characters, Jim did it anyway. He had doodled lots of bird puppets over the years and wanted an excuse to try some out. The large yellow Nutty Bird was a standard live-hand puppet who could make grand, expressive motions and even play the guitar. Sour Bird, however, did not have wings, and his feet, clenching the top of a fence, were actually two sets of fingers painted to look like bird’s feet. The performance involved one puppeteer controlling the mouth in a traditional manner and a second moving his fingers to serve as the gesturing feet. Jim had not done this before and it worked beautifully. It was the design of Nutty Bird, however, that had more of an impact – his look is very close to the look Jim chose for Big Bird in 1969.

Learn all about the Mirinda commercials shot in Europe in the 1970s. 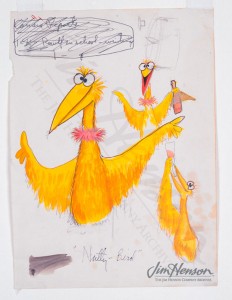 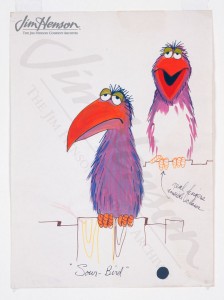 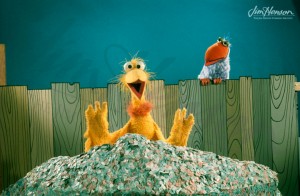