All of these collaborations were a direct result of the successful work for Julie on Sesame Street. There was a real rapport between the Sound of Music star and Jim’s characters. Andrews interacted seamlessly with Bert, Ernie, Cookie Monster, Big Bird, and especially Kermit the Frog. Kay Gardella, previewing the program in New York’s Daily News, said, “This warm, ingratiating hour, full of clever ingenious material, lifts the spirit, touches the heart and soothes whatever savage beasts might be lying dormant in one’s breast.” He was particularly taken with the medley of Broadway hits which took advantage of the combined talents and experience of both star and guests. He said, “The best number of all features the Cookie Monster, who eats everything in sight, dueting with Julie on ‘Hey Big Spender,’ from ‘Sweet Charity.’ As she sings, he eats her shoes and finally, even a can of TNT she places before him and a lighted candle.” The natural chemistry was further demonstrated when Cookie Monster presented Andrews with a rose which she promptly ate. “You’re my kind of girl!” Cookie exclaimed.

For The Muppet Show, Andrews went above and beyond the usual guest contribution to the entertainment. Beyond just performing on the program, Andrews composed a song especially for Kermit, “When You Were A Tadpole.” Having worked together so many times, they had a special connection – when the director asked them to redo a take, Andrews apologized. Kermit quickly said, “No, it wasn’t you. It was me. I forgot the lines.” She turned to him and, looking him straight in the eyes, replied, “Thank goodness for that. You’re human after all.” 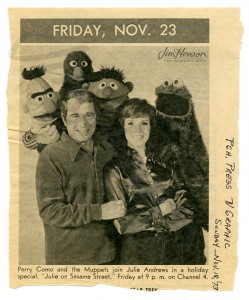 Press promotion for Julie on Sesame Street in the Pittsburgh Press, November 18, 1973. 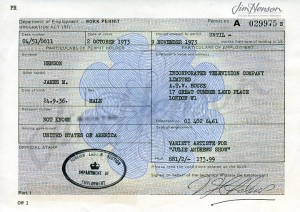 Jim’s UK work permit for his guest appearance on Julie on Sesame Street. 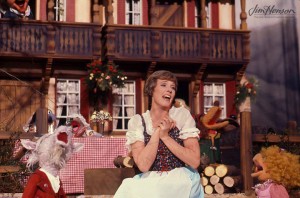