In 1977, veteran entertainer Bob Hope came to London to visit the Queen… and the Muppets. Both Hope and the Muppets were requested to take part in the Royal Variety Performance, an annual benefit for the Entertainment Artistes’ Benevolent Fund which was celebrating its Silver Jubilee that year. The Muppet Show team, already based in London with productions facilities in Borhamwood, performed for an appreciative audience at London’s Palladium, and the puppeteers (and Sweetums) got to meet the Queen. Later in the week, Bob Hope taped an episode of the Muppets’ series and they, in turn, taped Hope’s television special. Other Muppet Show guest stars appearing on the bill for the royal command performance were Julie Andrews, Rudolf Nureyev, Harry Belafonte, and Cleo Laine.

On November 20, 1993, Frank Oz, Steve Whitmire, Jerry Nelson, Dave Goelz and Brian Henson (and the Muppets) had a return engagement for the royal family, once again as part of the Royal Variety Performance, this time at the Dominion Theatre. The show was produced by ITV with help for the Muppet bits from Henson producer Martin Baker, and script material was provided by Jim Lewis and Kirk Thatcher. While the royal family takes turns attending and the Queen doesn’t always join the audience, she was again in attendance for the second appearance. Clearly, Queen Elizabeth must be a Muppet fan.

Learn about Muppet connections with the British Royal family and the Royal Premiere of Labyrinth. 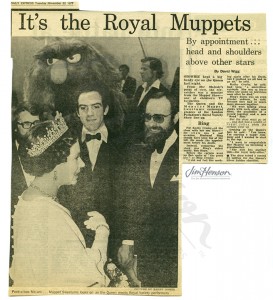 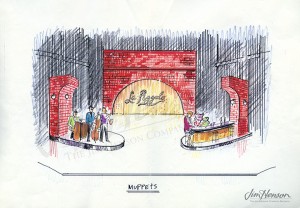 Set design for the Muppets’ 1993 portion of the Royal Variety Performance.