At a time when things were really heating up for Jim with possibilities for a network series, he was asked to tape an episode of the popular panel game show What’s My Line. He had a deal at the time with ABC to make some television specials and pilots and had already completed his Muppet Valentine Show for the network. In October 1974, the Herb Alpert special aired featuring the Muppets (including, for the first time, a very glamorous pig), and Jim was deep in development for his pilot, The Muppet Show: Sex and Violence which would tape in December.

What’s My Line featured a panel of distinguished and amusing people who, for most of the program, asked guests questions in order to figure out his or her occupation. The show also had a “Mystery Guest” segment featuring a celebrity, and the panelists (blind-folded) had to figure out the person’s name. Jim came on carrying Kermit, signed in on the blackboard so the studio audience would know who he was (in case he wasn’t immediately recognizable which was likely in Jim’s case), and began taking questions. Jim’s distinctive voice gave the panel an edge, and they were all pleased to see Kermit on Jim’s arm when they removed their blindfolds. 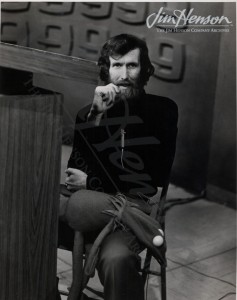 Jim and Kermit around the time he taped What’s My Line, 1974.