In the fall of 1973, Jim was working on The Muppet Valentine Show which was to star Mia Farrow and introduce a bunch of new characters like Crazy Harry and George the Janitor. The opportunity to do a primetime half-hour special featuring the Muppets was very exciting to Jim, and he was eager to get all the details right. He had a strong staff in his workshop perfecting the puppets and their wardrobes – and they were busy…hand knitting a sweater for the giant Thog was no small task. Mia Farrow’s costume would also take some care. In an unusual situation for television variety shows, Farrow was noticeably pregnant. That wasn’t a problem for Jim and his writers, Jerry Juhl and Jerry Ross, given the theme of love and romance inherent to the show, so they just sort of went with it. That included not making any effort to hide Farrow’s condition or to wardrobe around it. To that end, Jim met with and hired New York based fashion designer Donald Brooks. Along with apparel for department store shoppers, Brooks was well known for his Broadway, film and television costume designs and was certainly up to the job. For the fantasy sequence featuring Farrow and the big blue monster Thog singing “Real Live Girl” within an oversized 3-D Valentine card, Brooks designed a frothy white dress covered with lace and ruffles over a hoop skirt. The poofy-ness of the costume obscured Farrow’s belly so that it didn’t distract the audience allowing them to focus on the wonder and affection exhibited by the two singers. 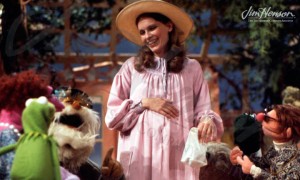 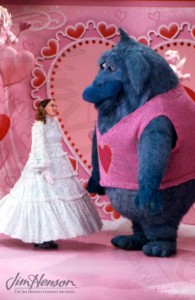 Mia Farrow in her Donald Brooks dress and Thog in his sweater in The Muppet Valentine Show, 1973.