Jim benefited in many ways from his three years of performing Rowlf on The Jimmy Dean Show in the early 1960s. Not only did he firmly establish his performing partnership with Frank Oz and receive a serious education in the art of comic writing from the show’s writers Will Glickman and Buddy Arnold, but Jim’s work was given wide exposures and became popular with national television audiences. Throughout the country, people knew Rowlf and by extension, Jim. Requests to appear on other national programs like The Tonight Show, The Mike Douglas Show, and The Ed Sullivan Show came quickly.

Diana Birkenfield was starting her television career as an assistant to Jimmy Dean’s producer Bon Banner. Jim kept his eye out for talented people and seeing Birkenfield behind the scenes, he recognized her strength in coordinating production. He asked her to spend the summer hiatus of 1964 assisting with his short film, Time Piece, marking the beginning of a long and productive professional relationship.

Working on a full-time basis, Birkenfield coordinated and produced many of Jim’s television projects in the late ’60s and early ’70s including The Frog Prince and The Muppet Musicians of Bremen. In 1981, returning to Henson after working on other projects, Birkenfield became Vice President of Television Production and for Fraggle Rock, she served as Executive in Charge of Production. She continued on a freelance basis producing specials like A Muppet Family Christmas, Sesame Street – 20 and Still Counting, and Jim’s last television show, The Muppets at Walt Disney World. Birkenfield was part of the team that, in 1987, won a Gold Hugo award at the Chicago International Film Festival for The Christmas Toy. And, it is Birkenfield’s meticulous files from the 1960s that make up much of the archival record for that time, allowing us to delve deeply into that seminal period of Jim’s development. 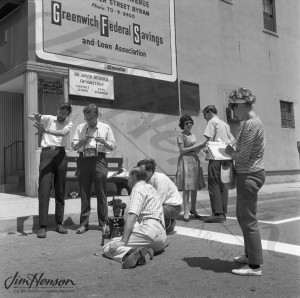 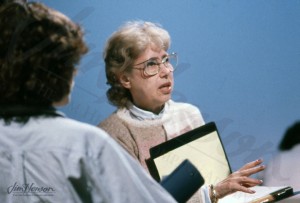 Diana Birkenfield on the set in the 1980s.