When Jim got the green light to develop his self-hosted anthology series The Jim Henson Hour, he was energized by the opportunity to develop any story that had been floating around in his imagination. From almost the beginning, he enjoyed dog characters and put them to good use – having Rowlf interact with Jimmy Dean, Rufus with Cinderella and Mia Farrow, Foo Foo with Miss Piggy, and the Storyteller’s dog with John Hurt. By his own admission, he delighted in the popular paintings of dogs playing poker, and he imagined a canine-populated world. This became Dog City, a film noir homage featuring the heroic Ace Yu and his nemesis Bugsy, performed with gleeful idiocy by Jim. The description developed by Jim with Tim Burns, Cynthia Friedlob and John Semper for the production team detailed the ideas of the show:

“This story takes place mostly at night. It will be shot in a dark, gritty style which calls for a lot of rim-lighting shadows, and fog. The gun fights and car chases will give it the feeling of a 1930’s cop movie, but the music and the comedy will add an element of hipness to the story. The narrative will follow the Zuckers’ AIRPLANE style, with as many jokes – verbal and visual — as we can squeeze into each moment. (For example, at one point Ace may close the club by throwing a ball out the front door and yelling, “Fetch!” at which point the club will empty immediately. Or the dogs, as they disagree with each other, might be reduced to barking and growling. Bugsy, especially, has a problem with his distemper.)”

Jim took on directing duties, enjoying the myriad bad puns and dog jokes from both in front of and behind the camera. While not part of the writing team, it was impossible for Jim’s long-time writing partner Jerry Juhl to stay away from so many delicious and dumb jokes, and he served as a co-producer on the shoot. After Dog City aired on May 5, 1989, Jim was gratified to hear that he had won the primetime Emmy award for outstanding directing in a variety or music program.

See the trailer for The Jim Henson Hour: Dog City.

Learn about the various dogs that were part of the Henson household. 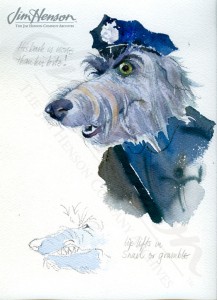 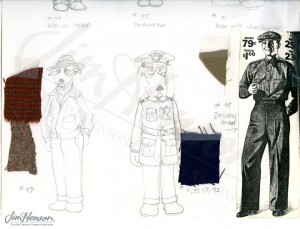 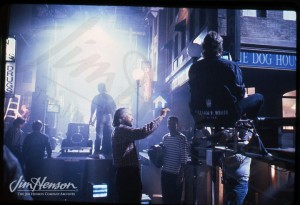 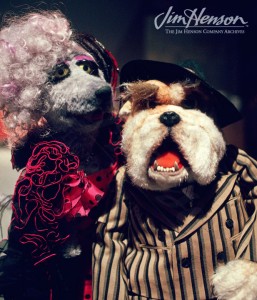 Bugsy and his moll Miss Belle from Dog City, 1988.