To let television viewers know about their new product, Gleem toothpaste with Flouride 700, the Procter & Gamble Company and their Madison Avenue agency Compton Advertising enlisted Jim’s help. The idea was simple – something that Jim had been doing in commercials for a decade – set up a conflict between two characters, one who likes the product and one who doesn’t. Each time, bad things happen to the one who doesn’t.

For the Gleem spokesman, Jim designed a new character, Clyde. His counterpart, Horace, was adapted from an existing puppet, his grouchy attitude made evident by the addition of eyebrows so bushy that they obscured his (non-existent) eyes. When Clyde excitedly announced the new toothpaste, Horace was unimpressed. The addition of fluoride meant nothing to him and he announced, “I don’t want it!” As Clyde continued his pitch, Horace protested, “I don’t need it!” and finally “I won’t buy it!” Clyde suggested, “Maybe I can convince you,” and zapped Horace with a bolt of lightning. That did the trick…more or less. Unlike in the eight-second spots Jim had done earlier that would have ended with the lightning bolt (or explosion or a falling building,) audiences now got to see Horace’s conversion in the rest of this sixty-second spot. He is open to hearing more but then doesn’t believe that the toothpaste can both fight cavities and whiten his teeth. A second zap and he’s convinced. With a big smile, Horace says “I like it!”

While it is clear that Jim and his team wrote and filmed at least a rough version of this commercial in 1967, there is no evidence that it aired. Given Jim’s note in his journal that this was a “test commercial,” it seems that it was probably never shown on television.

See a bit of silent test footage of Clyde and Horace in action. 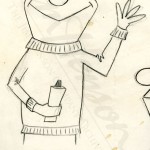 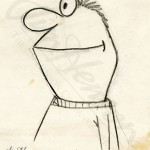 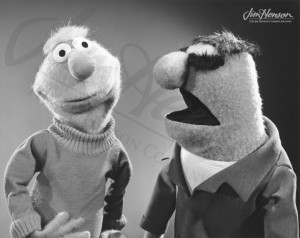