Almost from the start, Jim made monsters with voracious appetites and stubborn, single-minded machines with explosive personalities. Jim’s immense curiosity about new technologies and his ability to embrace the absurdities presented by man’s hopes and fears for the computer age made machines, robots and computers obvious players in Henson scenarios. The comic potential of nefarious technology was apparent, and Jim and his colleague Jerry Juhl were especially taken with the language evolving alongside these modern advancements. In the early 1960s, they worked with both APECO (the American Photocopy Equipment Company) and AT&T to create films to liven up meetings of sales staff, engineers and executives. In 1966, they began a long relationship with IBM’s product group and were immersed in the technical terms and expressions used to describe and promote IBM equipment. It’s easy to imagine Jim and Jerry trying to keep a straight face as some young engineer earnestly explained the details of a business machine, using words like capacitor, longitudinally polarized, exponential, manifold, and vaporescent. The sheer poetry of this collection of words would have been irresistible.

For Jim’s October 8, 1967 appearance on The Ed Sullivan Show, he and Jerry wrote a script called “Monster & Machine”. Like the serious robot they created for AT&T, this machine would perform a monologue reciting its attributes, punctuated with beeps. In this case, a large green monster with big teeth (the precursor to Cookie Monster), would disassemble and ingest each part of the machine as it was described. Jim and Jerry’s effort to utilize the most mind-numbing technical language must have been great fun, and with increasingly complicated combinations, they came up with phrases like, “The quantum polarization of the energy transfer involved herein results in the emission of a small amount of gaseous methane, which is also transposed through the exhaust manifold,” and “The electromagnetic console in this same area is synchronized to a pragmatic signal compiler by means of a sonar metabolic transducer for maximum data existialization.”

The monster, gleefully munching away, thought he had the upper hand, but he should have been listening more carefully before he popped the last bit in his mouth. When the machine said, “Finally, the frumious touch-back polygraph should always be equalized with multi-stage nitro cellulose for solid state fiscal detonation,” the monster took no notice. As the final part went in his mouth, he heard from the hardware in his stomach, “Nothing can keep this machine from performing its primary function – which is to be the most powerful exploding device known to man.” Viewers got to see the ultimate Muppet ending – characters getting eaten AND exploding.

See another self-destructive robot with an expansive technical vocabulary created by Jim for AT&T. 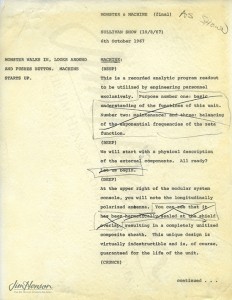 Page from Jim and Jerry Juhl’s script for The Ed Sullivan Show. 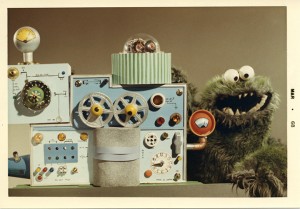 The monster eating a machine on Ed Sullivan, also used for IBM. 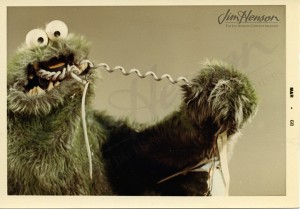 The monster and the machine on Ed Sullivan, also used for IBM.