Recognizing the comic genius of Mel Brooks’ ensemble casts from his 1974 films Young Frankenstein and Blazing Saddles and from other Brooks projects, Jim made sure to host many of them as guest stars on The Muppet Show. These included Gene Wilder, Marty Feldman, Madeline Kahn, Harvey Korman, Zero Mostel, Bernadette Peters, Liza Minnelli, and Cloris Leachman. In The Muppet Movie, Mel Brooks himself appeared as the mad scientist (along with Leachman and Kahn in small roles) as did Brooks regular Dom DeLuise. Richard Pryor, who would work with Brooks later, also made a cameo in the film. Clearly, Jim and Brooks shared an appreciation from many of the same actors. Others that worked with both Jim and Brooks over the years were Orson Welles, Charles Durning, Gregory Hines, Spike Milligan and John Hurt.

In Leachman’s episode of The Muppet Show for the second season, her announcement that she’s a vegetarian seems to set off a pig rebellion. A porcine mob takes over the show, locking up Kermit, Fozzie and Gonzo. Miss Piggy is conflicted between her love for Kermit and her pig pride (and her inability to pass up a chance to appear center stage). Leachman is confused by a giant pig posing as Kermit the Pig but goes on to sing a Nelson Eddy/Janette MacDonald style duet with Link Hogthrob, joined by pig Mounties. She arranges a hog calling contest which clears out the pig take-over in time for her to do the final song “Just In Time” with Doglion and Sweetums. Leachman took pleasure in hamming it up in a completely silly episode that made good use of a lot of Muppet pigs. She clearly enjoyed herself, later describing the Muppets: “They have that look in their eyes – a mixture of charm and innocence – which is completely irresistible.” 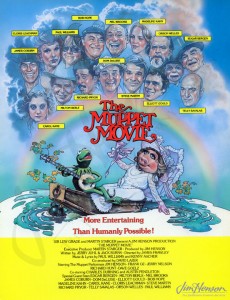 Promotional brochure for The Muppet Movie featuring Mel Brooks and other stars that appeared in the film. 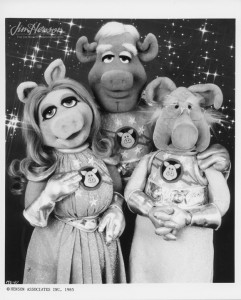 Miss Piggy, Link Hogthrob, and Dr. Strangepork ready for “Pigs in Space” on The Muppet Show. 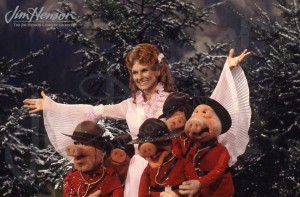 Cloris Leachman sings with Link Hogthrob and other pig Mounties on The Muppet Show, 1977.