From the start, Jim saw the planet as a small place where everyone is interconnected. Throughout his career, he tried to make this point, telling stories about how groups of different creatures could learn to get along, protecting their environment along the way. He recognized that through television, he could make an impact on the way people interact, or at least get them thinking about it. In a 1989 speech for The Better World Society, Jim said:

“Television has enormous power to change attitudes — and to change them on a global level. It has the power to make people aware of a problem and reconsider the way they think about it. We’re seeing this right now around the issue of the environment. Through television, people are learning what’s happening to their environment and realizing that it’s very much in our own best interest to protect the environment. When enough attitudes change, politicians and corporations — slowly, but inevitably — must respond. That leads to changes in legislation, in corporate behavior, and in the way each of us lives. That’s social change.

That’s the wonderful thing about creating television for children. By making them aware, giving them a positive image of what the world can be, and showing them that they can make a difference, you can affect this same kind of social change. And it’s not just for today — It’s for the future.”

Learn about Jim’s work with The Better World Society. 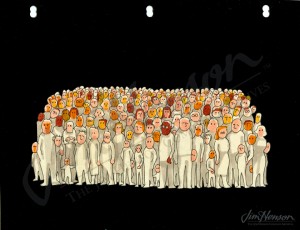 This entry was posted in 10-October '88, 1988 and tagged The Better World Society. Bookmark the permalink.