As part of his 1972 pitch to ABC for a late-night five-minute show, Jim had the idea to do a musical trio with puppets that were caricatures of himself and his colleagues Frank Oz and Jerry Nelson. The three puppets (Jim on banjo, Jerry on guitar, Frank on bass), which Jim first referred to as a “rock trio,” were designed and built by Bonnie Erickson. She was trying a new technique by carving the faces out of foam — it worked well and she used it again to great effect when she made Statler and Waldorf a couple of years later. In October of 1972, Jim, Jerry and Frank went out to Los Angeles to tape material for The Perry Como Winter Show set in a ski lodge. Among the pieces they shot, the trio played the appropriately themed song “Don’t Mess Around With Jim”. It aired that December 4th on CBS. The group, by then referred to as The Country Trio, appeared on The Dick Cavett Show, The Muppet Show: Sex and Violence pilot and several times on The Muppet Show. 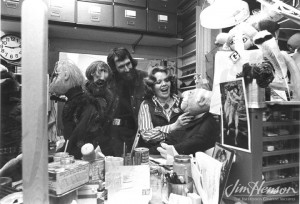 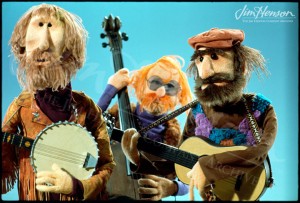 The Country Trio, Jim on banjo, Frank on bass, and Jerry on guitar, on The Muppet Show.