Both Kermit and Miss Piggy made appearances on country music star and prolific song-writer Dolly Parton’s variety show. Jim taped his appearance first – Kermit and Dolly met up in a bar, bantered back and forth (acknowledging Parton’s similarity to Miss Piggy) and then sang a duet, the Sly and The Family Stone song “Everyday People”. Dolly seemed comfortable with Kermit, and Jim had an old friend on the set – acting as a producer and writer on the show was Jack Burns. He had been head writer for the first season of The Muppet Show and co-wrote the script for The Muppet Movie. Their relationship went back another decade – in 1967, Burns and his comedy partner Avery Schreiber had appeared as guests on Our Place, a short-lived variety show hosted by Rowlf. (Schreiber was also a guest star on the first season of The Muppet Show.) To prepare for the Dolly appearance, Burns wrote Jim and asked about the staging, acknowledging, “It has been a long time since we did this together on The Muppet Show…” His affection for Jim was evident; despite this being a piece of business correspondence, Burns signed the letter “Love, Jack.”

It was Miss Piggy’s turn next. For her appearance, the script called for a very diva-ish situation in which Miss Piggy has taken over the show, insisting that Parton’s solo be cancelled. A confrontation ensues with the two blonds strongly expressing how much they each “appreciate” the other’s appropriation of her look. Imitation is the sincerest form of flattery, after all. Their mutual fondness takes over, and they sing “Bosom Buddies” together. Their friendship continued, and when Parton won the People’s Choice Award for Favorite Female Performer in A New Television Program the following year, Miss Piggy generously offered her congratulations in a 15-second video. 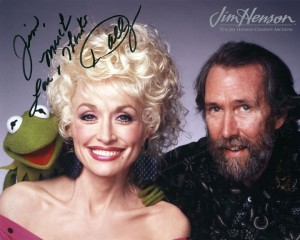