Jim went out to Los Angeles in October 1984 to make a presentation at the Academy of Motion Picture Arts and Sciences as part of their George Pal Fantasy Lecture Series. According to the flyer advertising the event, the lecture featured, “Mr. Henson in discussion of fantasy in film, using his own work in the movies as a springboard for discussion. His talk will be accompanied by excerpts from a number of his films, including new material from a soon-to-be-released project.” He showed clips from the Oscar-nominated Time Piece, his Sesame Street “Number Twelve” stop motion film, the three Muppet feature films, and The Dark Crystal. The soon-to-be-released project was Dreamchild, the first Henson Creature Shop project for an outside client.

Jim had an active relationship with the Academy, and they have continued to highlight his work. The AMPAS archives houses a Jim Henson Collection of materials available to researchers on loan from the Jim Henson Company Archives. These represent Jim’s film work going back to Time Piece (1965); along with the feature films, the collection includes an array of Jim’s experimental works.

During the same Los Angeles trip, Jim shot a brief cameo for his friend John Landis’s film, Into The Night. In a very short scene, Jim is seen talking on the telephone to “Bernie” and is forced off so that the actual characters in the film can make a call. Bernie, of course, would have been a nod to Jim’s manager, Bernie Brillstein, who also worked with Landis (and pretty much everyone else in Hollywood at that time). Landis had become friends with Jim and Frank Oz during The Muppet Movie (Landis puppeteered in the finale), and Frank had already appeared in Landis’s films Trading Places and The Blues Brothers. It was Jim’s turn, and he had fun in his rare turn before the camera.

Learn more about the AMPAS Archives Jim Henson Collection
and see a recent nod to Jim on their website.

Learn more about Dreamchild and the beginnings of Jim Henson’s Creature Show. 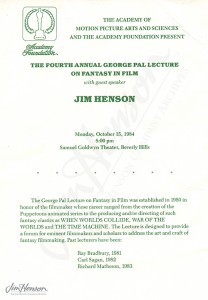 The invitation to Jim’s 1984 lecture at The Academy of Motion Picture Arts and Sciences. 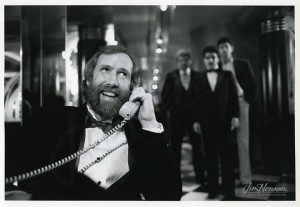 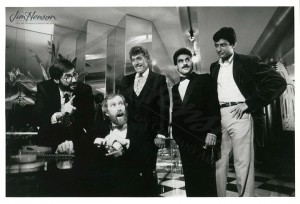 John Landis (far left) and Jim in Into the Night.