By the late 1980s, Jim’s participation in a range of philanthropic causes was extensive. He supported many children’s charities like Graham Windham and Ronald McDonald House and arts organizations like the Brooklyn Academy of Music, the American Film Institute and the American Museum of the Moving Image. Jim’s interest in environmental causes was demonstrated in his work; conservation messages infused Fraggle Rock and were front and center in his Jim Henson Hour piece “Song of The Cloud Forest”. In that vein, the Muppets made an array of public service announcements for the National Wildlife Federation, and 1988 marked the beginning of Jim’s work with The Better World Society.

Early that year, Jim had met Mickey Hart of the Grateful Dead. They discussed world music and Hart’s work with the Gyuto monks and their unique vocal techniques. Hart sent him information about a planned documentary and a CD of their music. Several months later, Jim was approached about doing a public service announcement to promote the Grateful Dead’s upcoming benefit concert supporting rain forest conservation. According to Alex Rockwell’s memo (Jim’s creative assistant) in anticipation of a script meeting, “Jim is thinking we would use Animal as a representative Muppet. Jerry Garcia likes this idea as well.” Given that Hart was the drummer for the band, Jim may have chosen Animal in tribute.
The New York Times described the event the week before:

“In a rare appeal to their devoted fans, known as Deadheads, leaders of the Grateful Dead rock band announced this week that they were starting a campaign to save the world’s tropical rain forests. To begin the campaign, the group is to perform with two other rock bands at a benefit concert at Madison Square Garden on Sept. 24. The concert is expected to raise $1 million.

“We’ve never called on our fans to align themselves with one cause or another, and we’ve always avoided making any political statements,” the band’s lead guitarist and vocalist, Jerry Garcia, said Tuesday. “But this is an issue that is life-threatening, and we hope that we can empower our own audience to act.”

Suzanne Vega and her band and Bruce Hornsby and the Range are the two other groups that are to perform at the concert. The proceeds will be donated to three environmental groups, Greenpeace, Cultural Survival and the Rainforest Action Network.”

Animal’s participation amounted to a public service announcement to be broadcast in the days leading up to the concert and a one-minute video shown during the concert. With a script from Muppet writer Jim Lewis, Animal’s PSA part was limited to his yelling, in a tropical setting, “Save Forest! Save Forest! Save Forest!” and then “Deadhead! Deadhead! Deadhead!” For the concert, Kermit made a more articulate plea for humans to protect the rainforests while Animal ran back and forth doing his “Deadhead!” chant. 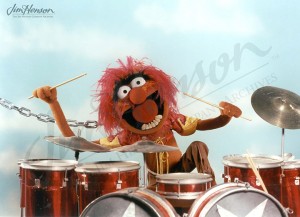 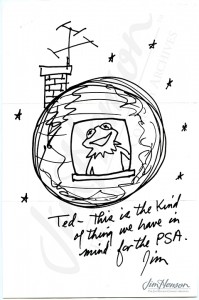 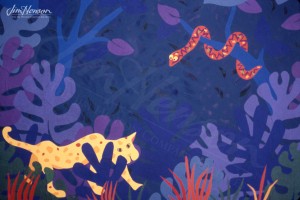 Cheryl Henson’s design for “Song of The Cloud Forest,” 1988.