Early in 1971, Jim performed on Tom Jones’s show which aired on ABC, beginning an involved relationship with the network which culminated with airing of The Muppet Show: Sex and Violence pilot in 1975. In November 1971, Jim and his creations had filled the entire 90 minutes of Dick Cavett’s show, a mainstay of ABC’s late night lineup. No stranger to late night, having started with a five-minute show in the 11:25 timeslot down in Washington in the 1950s, Jim would have been eager to talk to the ABC programmers about the chance to do something along those lines for the network. It wasn’t the prime time Muppet series Jim had been pitching, but a regular late night five-minute show would have been for adult audiences, something he had been hoping to get back to since Sesame Street premiered in 1969.

Apparently, ABC was interested and Jim began compiling ideas. For the five on-air minutes, he imagined various short scenarios: There might be two old people in a New York club or a couple on a park bench giving commentary. A sage might answer questions or a newsman might report on a rogue salad attacking a French chef during a cooking show. There could be a parody of a medical show or a soap opera, or a spoof of a western film trailer. A sort of country/rock trio, looking a lot like Jim and his colleagues Frank Oz and Jerry Nelson could perform, or Kermit could serve as host for a Tonight Show satire “The Jackie Kavson Show”. The last idea seemed to be Jim’s favorite, and he expanded his notes into an illustrated proposal. He described it as:

“This is the Muppet version of the Late Night Talk Show. Tonight’s guest include: a hippie poet, a Hollywood starlet, a very bad night club comedian and a cynical writer for a valentine company. The topic for discussion is Love. This soon turns into an argument, than a bitter quarrel, finally an all-out barroom brawl. In the end, police sirens can be heard as the riot squad comes to quell the fighting panelists, who are throwing furniture and screaming epithets like, ‘Love they neighbor, you stupid creep!!’”

While, as Jim noted in his journal, ABC decided to pass on the five-minute show, Jim never wasted good ideas. Just a couple years later, Kermit would get to host his own show, chatting with guests, and being supported by Fozzie (the bad night club comedian), Miss Piggy (the Hollywood starlet), the Swedish Chef (always playing defense against his creations), Statler and Waldorf (the old guys providing commentary) and a country trio consisting of caricatures of Jim, Frank and Jerry. Parodies like “Veterinarians’ Hospital” would evolve from Jim’s notes about spoofing a medical show or a soap opera, and numerous sketches would be set in western saloons or sheriffs’ offices, often featuring chickens or a bear on patrol. And a Muppet newsman would report on the chaos enfolding around him. 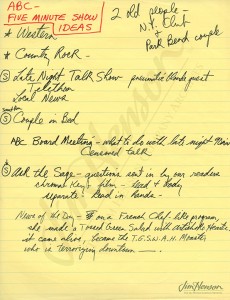 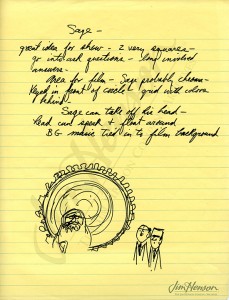 Jim’s idea for a Sage character for a late-night show on ABC, 1972. 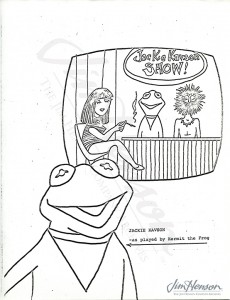