In the spring of 1985, Kermit the Frog turned 30 years old. (When he celebrated his 21st birthday on Dinah Shore’s show back in 1977, he was in a typical of Hollywood fashion approximating his age.) Thirty years on television was a real milestone and something worth celebrating. Jim and his team went up to Toronto with dozens of puppets to tape an anniversary special, The Muppets – A Celebration of 30 years, which would air on CBS on January 21, 1986.

A chronological retrospective of Jim’s work, the show’s conceit was that the Muppets were holding a gala, black-tie banquet hosted by Fozzie Bear with Kermit as guest of honor. Jerry Juhl wrote the script for the introductory material between clips which ranged from Jim’s first show in Washington Sam and Friends and early commercials, to the feature films, guest appearances, and series. Keeping things snappy were numerous musical numbers from The Muppet Show and Sesame Street featuring various celebrities along with other cameos and the requisite bad jokes.

Jim and Kermit made the rounds of the talk shows, promoting the special and reflecting on how far they’d come. On Entertainment Tonight, Jim seemed a little embarrassed about his early work, saying “When I look at that stuff now, I just cringe because it’s so terrible. And at the same time, it’s interesting because it is how we got started.” Clearly he felt his Sam and Friends work had some merit or he would not have included it in the show. Despite producing this look back, Jim was always looking forward and did not really want to dwell on the past. On CNN’s Show Biz Today, he said, “The 50s do feel like a long time ago. Basically, it feels like there’s so many more things to do still. More areas to try and new things to accomplish.” When asked on Hollywood Close-Up if he was having as good a time as he seemed to be having, Jim responded enthusiastically, “Yes, I love doing what I do. I can’t imagine anybody else having as much fun in their work as I do. I’m very fortunate to be doing the kind of thing that I enjoy more than anything else.” Of course, all that fun comes at a price. At the end of The Muppets – A Celebration of 30 Years, the camera pans around the ballroom to a table in the back where Jim, dressed in his tux, is finishing his dinner. Grover, in his waiter role, presents Jim with the bill. 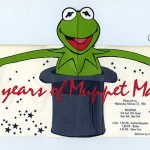 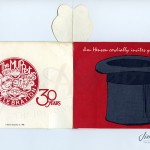 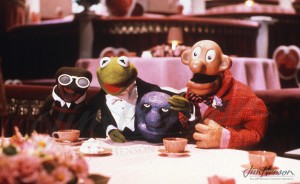 Kermit with Harry the Hipster, Yorick and Sam from Sam and Friends celebrating 30 years on television. 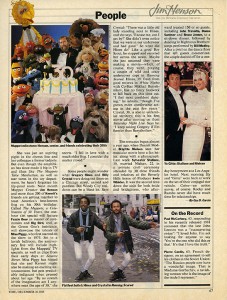 Time magazine’s coverage of The Muppets – A Celebration of 30 Years, 12/30/1985. Not surprisingly, Miss Piggy steals the limelight.