Fans worry that with the healthy eating initiatives introduced by Sesame Workshop in recent years Cookie Monster will somehow forego his sweet-centric diet and become a Veggie Monster. But Cookie Monster has always been an equal opportunity eater, happy to gobble up fruits, vegetables and pretty much anything else along with his cookies. As early as 1974, just heading into the sixth season of the long-running show, Cookie Monster taped a public service announcement to encourage kids to have a healthy diet. He already knew, almost forty years ago, that cookies are a sometimes food. At the same time, Cookie Monster released his record album titled for his signature song by Joe Raposo, “C Is For Cookie”. 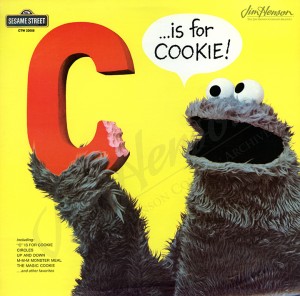 Cookie Monster is partial to the letter C on the cover of his 1974 record album.