When the Muppet Babies animated series premiered on September 15, 1984, it represented Jim’s first foray into Saturday morning television (since his brief debut in Washington thirty years before) and the first animated show featuring his characters. With a well established fanbase already in place, the Muppet Babies were an immediate hit and ran for eight years and 107 episodes, garnering numerous awards. The success did not go unnoticed and imitators abounded – soon there were baby versions of Loony Toons characters, Tom and Jerry, Scooby Doo, and, eventually, the Sesame Street Muppets. The Henson Company even did a sort of double parody in a Muppets Tonight! sketch — “Seinfeld Babies”.

Learn more about the origins of Jim Henson’s Muppet Babies. 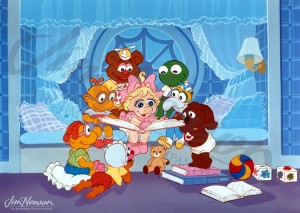 The Muppet Babies in their nursery. 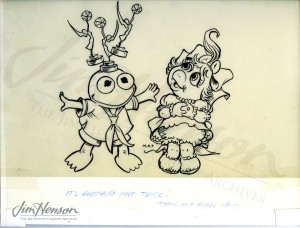 Baby Kermit and Baby Piggy celebrate their third Emmy award in this sketch by Michael Frith.