When Jim Henson had dinner with Douglas Adams, creator of The Hitchhiker’s Guide to The Galaxy, they must have had much to discuss. The idea of working together on a project was intriguing and in 1985, Adams got involved with some Henson projects. Their shared interest in technology brought the two men together, particularly as Jim explored the possibilities for computer animation (for the Labyrinth opening and Starboppers) and various computing tools.

Dark Crystal computer games had been developed in 1982, and by 1984, Henson Associates was licensing the Muppets for an array of computer games and software. A Labyrinth computer game seemed like an obvious product to pursue, and Jim’s colleague from Sesame Street Chris Cerf took the lead on development. Working with Charlie Kellner of Lucasfilm Games Division (and, according to Cerf, “one of the world’s most brilliant Apple programmers”), Cerf brought Jim up to date on the project in a letter dated November 20, 1985. He noted, “Douglas Adams has agreed in principle to consult on the game, and the current plan is that Charlie Kellner and I would spend a few days in London with Douglas in mid-December.” It’s unclear what Adams’s contribution to the game was, but it was released the following year by Activision.

Adams had been working with the Henson team that year on the Muppet Institute of Technology project. Collaborating with Digital Productions (the computer animation people), Chris Cerf, Jon Stone, Joe Bailey, Mark Salzman and Douglas Adams, Jim’s goal was to raise awareness about the potential for personal computer use and dispel fears about their complexity. In a one-hour television special, the familiar Muppets would (according to the pitch material), “spark the public’s interest in computing,” in an entertaining fashion, highlighting all sorts of hardware and software being used in special effects, digital animation, and robotics. Viewers would get a tour of the fictional institute – a series of computer-generated rooms manipulated by the dean, Dr. Bunsen Honeydew, and stumble on various characters taking advantage of computers’ capabilities. Fozzie, for example, would be hard at work in the “Department of Artificial Stupidity,” proving that computers are only as funny as the bears that program them. Hinting at what would come in The Jim Henson Hour, viewers, “…might even see Jim Henson himself using an input device called a ‘Waldo’ to manipulate a digitally-controlled puppet.”

While the show was never produced, the development process gave Jim and Douglas Adams a chance to get to know each other and explore a shared passion. It seems fitting that when production started on the 2005 film of Adams’s classic Hitchhiker’s Guide, Jim Henson’s Creature Shop would create animatronic creatures like the slovenly Vogons, the Babel Fish, and Marvin the robot, perhaps a relative of the robot designed by Michael Frith for the MIT project. 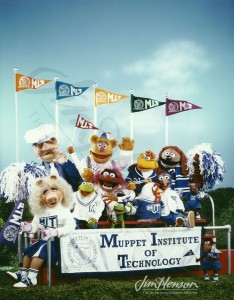 The gang promoting the Muppet Institute of Technology, 1985. 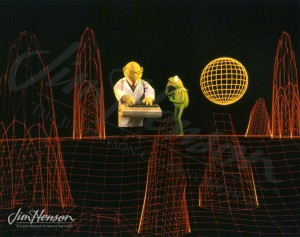 Kermit and Dr. Bunsen Honeydew in the digitally created world of the Muppet Institute of Technology, 1985. 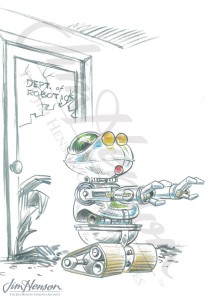 Michael Frith’s robot design for the Muppet Institute of Technology, 1985.