The final months of 1982 were filled with activities meant to promote The Dark Crystal which would open in theaters around the country on December 17th. But along with making presentations at science fiction conventions, opening exhibits, and shooting a documentary, Jim had to finish the film over ten days that September, putting the final touches on the complicated sound. The shooting had ended almost a year before, and Jim started 1982 overseeing the recording of Trevor Jones’s score, performed by the London Symphony Orchestra, dubbing sound in February, and tweaking changes after test screenings in March. By July, the film was close to what Jim wanted and his work that September marked the film’s completion. For an interview before the premiere, Jim was asked about his guilty pleasures. Jim was most interested in talking about his pleasures rather than his guilt: “I really love working in films. Since I’ve now completed only my third film, I’m just starting to learn what I’m doing in this medium. The previous twenty-five years or so, I spent working in television which, incidentally, I also love. But films have to be one of the supreme art forms, and directing has to be one of the greatest platforms from which an artist can work.”

Learn more about the premiere of The Dark Crystal. 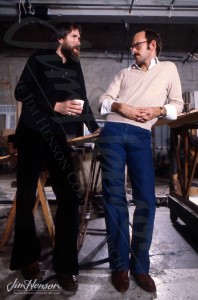 Jim with hi co-director Frank Oz on the set of The Dark Crystal.