Having hosted Morley Safer backstage at The Muppet Show in 1979 (where Miss Piggy was a terrible flirt), Jim knew producer Don Hewitt and the team at CBS’s 60 Minutes. In October 1983, word leaked out that the Muppets would begin appearing regularly in an “animated political cartoon” on the Sunday night show. The idea was that Jim and company would produce a brief comic bit, a sort of 3-D editorial cartoon, which would provide some comic relief on a weekly or monthly basis. When the press picked up the story before a mutually agreed upon version was in place, there was great concern over at Henson given the Muppets’ general effort to stay out of politics directly. The plan was to address topics like the upcoming presidential election and global warming, but in a non-partisan, humorous fashion.

Development of the “Muppet Minute” had begun earlier that spring and various ideas were exchanged. Jim wrote up some segments, and writer Joe Bailey contributed his ideas. The full range of classic Muppets were considered in all types of scenarios, but the team ultimately decided on starting with Mt. Rushmore, the four talking heads that had made their debut in Jim’s Muppet Show pilot “Sex and Violence.” Kermit, as seasoned news correspondent, would provide an introduction to the topic at hand and then turn the conversation over to George, Tom, Abe and Teddy.

Jim and his team went into the CBS studio to tape the first group of scripts on November 7th. Unhappy with the results, Sesame Street veteran writer Tony Geiss was brought in to write more scripts. A second taping session with performers Peter Baird, Neil Gallagher, Brian Muehl, Fred Newman and Jim was held on November 30th and three segments were taped. Despite general satisfaction with the new segments on the Henson side, the 60 Minutes producers were unable to find a spot for them during the program, and they never aired. 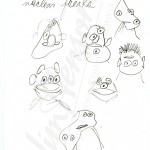 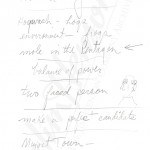 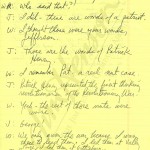 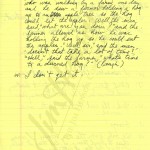