Filming hundreds of television commercials over more than a decade, Jim took advantage of the opportunities presented to experiment with different styles and technologies. Jim’s commercials started with standard hand and rod puppets and in 1962, Jim added “live-hand” puppets like Rowlf. He was eager to expand his repertoire so when the representative for the Cloverland Dairy, Theodore Patz, said that they wanted Jim to make some commercials for them that would, “…bear no relation to the others,” Jim jumped at the chance. Chroma-key (or green screen) techniques had been around for a while, often used for maps for weather reports. Jim certainly would have been familiar with it from the news programs that followed his Sam and Friends show and would have been eager to try incorporating it into his work. This was his chance.

For the Baltimore-area dairy, Jim proposed using the chroma-key system to insert a farm background behind his cow character. Jim described it in detail to the ad executive Theodore Patz in 1964:

“The principal charm of the spot will be the way the puppet does a nutty dance as he goes along singing the jingle. He will be manipulated by either three or four puppeteers, so he will be able to do all sorts of crazy dance steps. Also, the head will, of course, be manipulated separately, with the mouth moving in synch with the jingle. We will also have a control going to the end of the tail, so it too will dance to the music. The commercial will have to be made on video tape. This is because we will work the puppet in front of a black background so that none of the controls or puppeteers show to the audience. If we want to have a farm background behind the puppet, we can key insert the puppet over an artwork background on another camera. This is if we can produce these at a TV studio equipped with a Chroma-key unit.”

It was an ambitious plan and required special consideration when designing the puppet. To avoid big shadows appearing on the background, the puppet character needed to be relatively flat, giving it a look distinctive from Jim’s other very three-dimensional characters. The advertiser sent Jim a picture of a Guernsey cow as a model, and when the puppet was complete, Jim shipped it to Baltimore for approval. It came back to NY via Greyhound and once all was set, Jim and his team (Jerry Juhl, Don Sahlin and Frank Oz) shot a 10 second, a 20 second and a one minute commercial at the Logos Studio in Arlington, Virginia. Clearly there was some affection for this character – years later, Jerry Juhl, while giving Jim comments on a television pitch, jokingly suggested, “Maybe there’s a part for the Cloverland cow!”

See the Cloverland Cow in action. 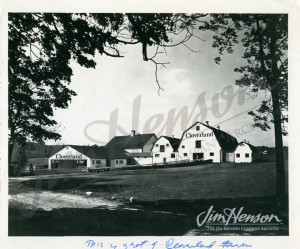 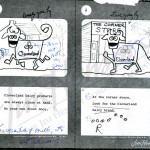 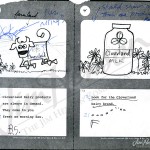 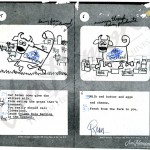 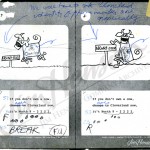 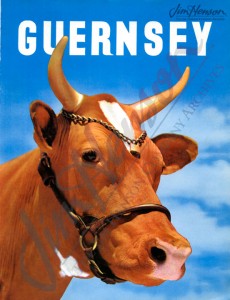