In 1980, Jim started an extended and meaningful relationship with the United Nations Children’s Fund. Given the Muppets’ huge popularity with young people around the world, it was a good fit. The August 23, 1980 press conference announced the designation of Kermit as the 1980 Chairman of the National UNICEF Day Halloween Campaign. Kermit and Jim posed with the familiar UNICEF trick-or-treating boxes and James P. Grant, the UNICEF Executive Director. Jim had taped radio and television public service announcements for the organization in Washington in June. Joe Raposo’s “Bein’ Green” was used as background music, and the PSAs were taped in a very familiar place – Rodell Studios in Georgetown where Jim had made hundreds of television commercials in the 1960s. Jim approved a letter from Kermit encouraging school groups to raise money for UNICEF, ending with Kermit’s heartfelt, “Thank you for caring.” According to a memo several months later from Henson PR head, Michael Frank, “UNICEF reports happily that the 1980 Halloween campaign, with Kermit as Chairfrog, was the most successful in history. The whole Kermit-UNICEF involvement was so salubrious that UNICEF wants to do something unprecedented: offer Kermit a return engagement.”

The following year, along with re-upping for the Halloween campaign, Kermit served as the honorary Chairman for UNICEF Committee of Australia’s 1981 Appeal. Jim taped some more PSAs in London that summer, including one with Kermit’s nephew Robin. In the fall, Kermit appeared on new posters for the National (US) UNICEF Day. While the 1980 campaign had a general message, Kermit’s second appeal focused on something personally important to him – the availability of clean water. As he wrote, “You don’t have to be a frog to realize how important plenty of clean water is to all.”

In 1987, Jim was appointed to UNICEF’s National Advisory Council. Kermit’s collaboration with the United Nations’ activities for children continued under Brian Henson’s leadership. In 1993, the Henson publishing department including writers Louise Gikow and Ellen Weiss and illustrator Bruce McNally created For Every Child, A Better World, a beautiful book “by Kermit the Frog” sensitively describing deprivations many children face and the basic things in life all children should be able to expect. The copyright was given to the UN and proceeds went to support their projects. Brian wrote in his introduction, “Children who begin to think about others with understanding and compassion grow up to be understanding and compassionate adults. We believe this book can help children become the kind of adults who will make the world a better place.” 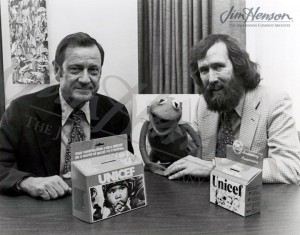 Kermit announcing his designation as the UNICEF spokesfrog in 1980.

Jim and Kermit with his UNICEF medal. Photo by Paul Schumach.