The Muppet Show went country western in the fifth season when Johnny Cash appeared as the show’s guest star for episode 117. By this time Cash had already solidified himself as one of the biggest stars in Nashville and his appearance on the show happened to coincide with his silver jubilee in show business. “This is a pretty good way of celebrating,” he remarked. His participation on The Muppet Show may not have been strictly a result of his own determination. His 10 year old son, John Carter Cash, played a strong role in convincing his father to agree to host the show. June Carter Cash explained it this way, “John Carter picks all his father’s shows. When Johnny said he’d been invited to do The Muppet Show, John Carter was absolutely adamant: he had to do it. We’re all fans of the show, but John Carter is devoted. He has at least fifty puppets of his own at home and runs his own little theatre.’’ The Muppet family found a way to bring Cash’s son into the act for the episode. While his father performed the song “Riders in the Sky” John Carter served as a puppeteer for one of the ghost puppets in the chorus.

Throughout the episode Kermit found himself embroiled in a power struggle with Big Tiny Tallsaddle, a Disc Jockey for the Muppet station, WHOG, which was broadcasting the evening’s events live over the radio. Between forcing Fozzie to share the stage with WHOG’s principal comic and forcibly preventing Rowlf from taking the stage, Big Tiny drove Kermit to extreme measures. Breaking from his usual meek frog demeanor, Kermit found the strength to kick Big Tiny and his crew out of the Muppet Show Theater and reclaim his authority as the one and only host of The Muppet Show. All tensions were resolved by the show’s end when Johnny Cash and the rest of the Muppet cast performed a medley of “Orange Blossom Special” and “Jackson”.

Cash had a longstanding relationship with the Jim Henson’s company, having made many appearances as a musical guest on Sesame Street, but he seemed to have a soft spot for The Muppet Show cast in particular. “I just love this show for the joy it gives everyone. But forced to choose favorites, I’d go for Animal and Miss Piggy. They’re the irresistible force and the immovable object, but don’t ask me which one is what!” 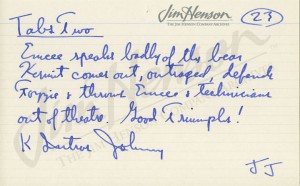 A rundown card for episode 117 written by Jerry Juhl, used to organize the show. 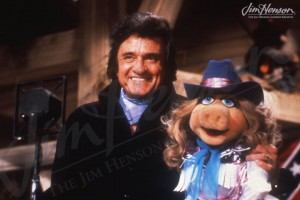 Johnny Cash on The Muppet Show