By 1960, Jim had already been working with puppets for five years, and through his daily show, commercial work and network variety show appearances, his work was both on local Washington airwaves and on TV screens around the country. He and his wife Jane recognized that there was much that could be learned by being engaged with the national puppetry community and decided to attend their first Puppeteers of America festival in August that year. With three month old Lisa in tow, the Hensons drove out to Detroit in their used Rolls Royce Silver Cloud that Jim had bought in celebration of his graduation from the University of Maryland that June. The festival was held at the Detroit Institute of Arts which holds an impressive puppetry collection (including Kermit the Frog, donated by Jim in the 1970s.)

Notes in Jim’s program indicate his interest in several performances, and he jotted down the title of a recommended book, Puppet Theatre Production and Manipulation by Miles Lee. Perhaps the most important part of this festival was the people that Jim encountered there. Burr Tillstrom, creator of television’s Kukla, Fran and Ollie, befriended Jim and Jane there – a thrilling moment for Jim who looked at Tillstrom as the most important puppeteer on television. He met Tillstrom’s colleague, puppet builder Don Sahlin, who Jim would recruit for The Muppets two years later. And in the front cover of his program, Margo Rose noted the contact information for her and her husband Rufus, best known as the puppeteers of Howdy Doody and his friends. The Roses would become close friends of the Hensons, and they would share happy times together over the next two decades. 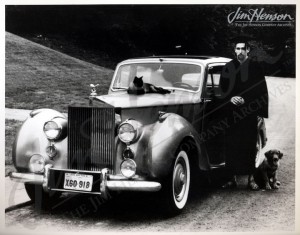 Jim with his Rolls Royce on his graduation day, 1960. 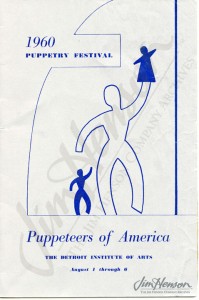 Cover of the 1960 Puppeteers of American festival program. 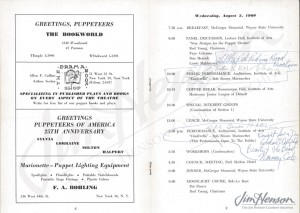 Event listings in the 1960 Puppeteers of American festival program with Jim’s annotations.