While Jim was always looking ahead and working on the next idea or inspiration, he never abandoned material that he knew worked well. For a Tonight Show appearance in August 1968, Jim used two pieces that originated on his Washington show, Sam and Friends, back in the late 1950s and start of the ‘60s: “Visual Thinking” and “I’ve Grown Accustomed to Your Face”. “Visual Thinking”, a conversation between two characters with animation superimposed over the filmed image, was reflective of the way Jim’s creativity was expressed – using images to explore and present ideas. One character, a “square” played by Kermit in the original, is having trouble visualizing his thoughts. A hip character, Harry the Hipster from Sam and Friends, gives him some pointers. Soon, animated drawings of whatever Kermit says appear above their heads. Harry starts scatting and soon abstract designs start to fill the screen, eventually obliterating the two puppets. On The Tonight Show, Kermit played the hipster role, instructing another Muppet in the art of visual thinking. The idea was used on Sesame Street, too, to teach about shapes.

“I’ve Grown Accustomed to Your Face” was more typical of the fare on Sam and Friends and was also performed by Jim on his first appearance on The Tonight Show in 1956. Kermit, dressed as a girl with a wig and a dress, lip synchs to Rosemary Clooney’s performance of the Lerner and Loewe song from their 1956 Broadway show My Fair Lady. The voracious Yorick, covered with a cloth painted to look like a happy face, devours his disguise and then sets on “Kermitina”, dragging her under by the leg with his teeth. The combination of this lovely song with Yorick’s wicked actions was both absurd and hilarious and audiences never tired of it. Brian Henson, in tribute to his dad, recreates this piece in his current improv stage show, Stuffed and Unstrung.

See the original version of Visual Thinking from Sam and Friends. 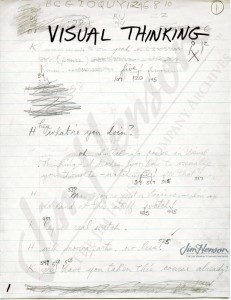 Jim’s handwritten script for “Visual Thinking” with codes for matching with the animation. 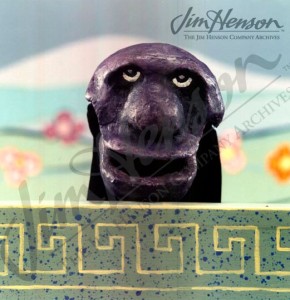 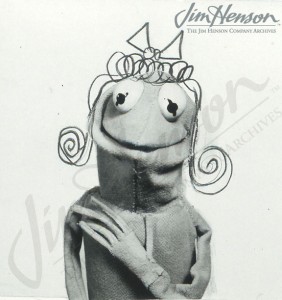 The original Kermit annotated by Jim to look like a girl.