For five days in the summer of 1966, Jim with Jerry Juhl, Frank Oz, Jerry Nelson, and Don Sahlin co-hosted The Mike Douglas Show, a popular daytime variety program that aired from 1963-1982. During his time on the show, Jim and his colleagues were able to showcase the full array of Henson entertainment in front of a live audience. They presented everything from puppetry performed in tandem with film animation, to samples of their commercial work, and even explanations of how some of the more complex puppets were designed and preformed. In between the sketches that they had already made popular like “Visual Thinking” and “Sclrap Flyapp,” the Muppets would perform musical numbers and talk with their very own guest stars like Carmel Quinn, the Mills Brothers, and Florence Henderson.

Hosting The Mike Douglas Show was a huge opportunity for the Henson gang to explore a range of material with an audience over a prolonged period. In contrast to other appearances made around this time, Jim wasn’t limited to eliciting a single, comedic response from the audience. Instead, he was able to delve into various social themes and psychological musings, like the “Idea Man” which used a floating puppet face superimposed over a filmed animation to explore the origin of ideas (this character “Limbo” was also utilized in the “Organized Brain”). This kind of creative freedom was seldom afforded in a brief guest appearance timeslot. He was also given the chance to experiment with the framework and structure of a full episode, determining how to interweave content like commercials and animations with musical numbers and skits. Taking advantage of the spontaneity that comes with filming before a live audience, Jim also cultivated unique moments like when Rowlf discovered that his mother was seated amongst the crowd in attendance.

Jim Henson appeared again on The Mike Douglas Show several times in the late 1960s and throughout the 1970s, but this first week of shows captures an important time in Jim Henson’s career, documenting his creative efforts in so many areas, and demonstrating the breadth of his talent and imagination. Fortunately, the Mike Douglas people hold recordings of most of his programs and have made the Jim Henson material available through The Jim Henson Legacy screenings. They are also in the collection of The Paley Center for Media.

Learn more about “The Organized Brain”.

Learn more about other guest appearance performances like “Sclrap Flyapp”. 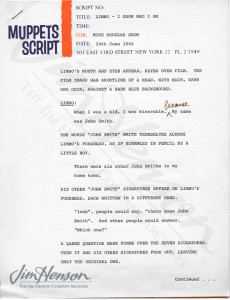 “Limbo – I know who I am” script for The Mike Douglas Show. 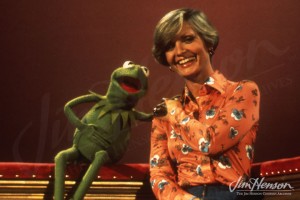 After first meeting on The Mike Douglas Show, Jim later invited Florence Henderson to appear as a guest star on the first season of The Muppet Show.