The Muppet Show Season 5 episode featuring singer Gladys Knight started off at the stage door when Pops made a Muppet-worthy pun about being, “…glad it’s night!” Things could only go uphill from there. Jim enjoyed having a singer of Knight’s caliber on the show and made sure she had several musical numbers and got to talk with house music expert Rowlf about singing the blues. Along with “Friendship Train” and “God Bless the Child”, Knight sang “Heard It Through the Grapevine” with a chorus of singing grapes. A snowstorm to end the number was made possible by a background story about roofing work on the theater (no need for the performers to bring down the house – “the roofers are handling that,” according to Waldorf).

Apparently, The Muppet Show was a favorite of the Knight family, and Gladys brought two of her three children with her for the taping. While her professional family, The Pips (brother Merald Knight Jr., cousin Edward Patten and cousin William Guest), did not perform on the show, they came along to Elstree Studios, too, to watch and enjoy. Having family around was normal for Knight – when asked about the rigors of her schedule, she said, “If you spend as much time on the road as we do, it’s important to be able to take your home with you.” Jim, who also tried to include his family in his work as much as possible, welcomed the visitors.

One of the more memorable sketches for the show did not include the guest star – it featured an encounter between Muppet archaeologists and a group of mummies (including a Gonzo-shaped one) singing Cole Porter’s “Night and Day”. The puppet builders in the Muppet workshop had a lot of fun creating the singing sarcophagi, building friendly characters for this completely silly yet charming bit. A good setting for Muppets, Ernie and Bert also entered an Egpytian tomb for a sketch on Sesame Street.

See Ernie and Bert in an Egyptian tomb. 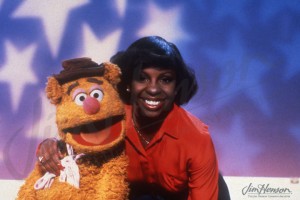 Gladys Knight on The Muppet Show. 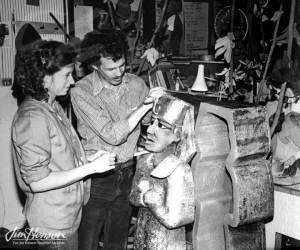 Bob Payne and Jan Rosenthal working on a Muppet sarcophagus for The Muppet Show. 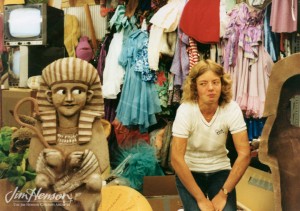 Builder Rollie Krewson imitates the expression of a character in the London workshop during The Muppet Show’s final season.