Liza Minnelli’s episode of The Muppet Show shot for the fourth season was one of a few that departed from the general backstage at a variety show format. Instead, it was performed as a sort of noir mystery story in 1930s dress. Minnelli played Liza O’Shaunessy, an actress, and Kermit was the Sam Spade-like detective investigating a threatening note she had received. In the show within the show within the show set in the Majestic Theater, Minnelli performs a big production number “Copocabana”. At the end, the cast discovers that the director, played by Dr. Strangepork, has been murdered, leading to another musical number. Backstage, Fozzie as Bear on Patrol asks for information and when Scooter speaks up, he is stabbed in the back. With a clue from O’Shaunessy, Kermit goes to catch the murderer. He gets knocked out but revives for a duet with Minnelli. Several others get murdered, but when Minnelli fakes her own death, Statler and Waldorf confess. This leads, of course, to another big musical number with the whole gang singing “Everything’s Coming Up Roses.”

Minnelli’s appearance on the show grew out of an encounter with Jim at the opening night party for her show at London’s Palladium the year before. She told him what a fan she was, and he invited her to be a guest star. When she returned to London for an appearance with Martha Graham’s ballet company at Covent Garden, she fit in The Muppet Show tapings during the day while performing in the evenings. Minnelli played O’Shaunessy on The Muppet Show, but she got to play herself a few years later in Jim’s 1984 feature The Muppets Take Manhattan. In the film, she sweeps in to Sardi’s only to find her caricature has been replaced by Kermit’s. It was a brief scene, but clearly she felt right at home with the Muppets, made even more so by her entrance on the arm of Muppet Show producer David Lazer who had also served as her host back in 1979. As multiple “thank you” notes from Minnelli in Jim’s files confirm, he and Lazer felt great affection for her and made sure to send holiday greetings and birthday gifts for years after they worked together. 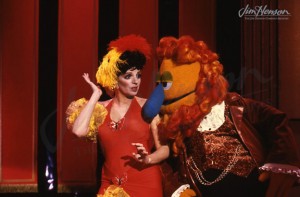