The shoot for Labyrinth took place on weekdays, and Jim used the weekends for brief vacations or business/production meetings on other projects. Sometimes, that meant the long haul to New York, landing back at Heathrow as the sun rose Monday morning and going straight to the studio. When possible, meetings were held in London. At the end of July, a group of curriculum experts and Henson people, including Jim, producer Duncan Kenworthy, and writers Jocelyn Stevenson and Louise Gikow held a two-day meeting at the Henson offices on Brewery Mews in Hampstead. The subject was a potential international television series to help teach English to speakers of other languages. Generally just referred to as “EFL” (English as A Foreign Language) in the files, as it developed over several years, it became the Muppetmobile, named for the multicolor vehicle that transported the show’s characters.

The briefing paper compiled by Kenworthy to launch the project that April confidently explained, “We will produce a series of programs for broadcast around the world. The programs will use Muppet characters, whether from The Muppet Show, Fraggle Rock or new creations. The series will have popular appeal, using music and comedy, and will be ENTERTAINING, INNOVATIVE, REWARDING, MOTIVATING. People will actually learn from them.” It went on to describe an ambitious plan to create complementary videos and books (that will be “glamorous and entertaining”) to augment the program. The two day meeting in July focused on the potential audience and curriculum for the series with presentations from consultants about content. Jim was perhaps most interested in the technical aspects of the show, seeing it as an opportunity to break new ground, and in making sure it was entertaining. The meeting notes say, “JH felt that computer generated material will give program new visual look,” and “JH wants to produce something that is fun. Story…will have to be entertaining to keep audience interested.” Jim wanted to use the digital material to convey information rather than for the characters. “Use something that is computer generated to project words. Half-live, half electronic. Get good flexibility to mix puppetry and people.” In other words, use the technology where appropriate but make sure to keep it entertaining with the characters. Once they broke into groups, the Henson people and the consultants started to share ideas for who would populate these shows and what they would contain. Jim suggested, “…a character who lives in the past and one who lives in the future – a dreamer.” On a more practical level, he thought there should be a surrogate for the viewer, “…a Muppet who doesn’t know English.” Finally, the notes say, “JH felt that the project was doable.”

But before anything really got done, Jim’s team needed to focus on Labyrinth, The Storyteller, Jim Henson Presents the World of Puppetry, The Muppets – A Celebration of Thirty Years, The Tale of The Bunny Picnic, the final season of Fraggle Rock, The Christmas Toy, Muppet Babies, Puppetman, The Ghost of Faffner Hall, and development on The Jim Henson Hour and The Witches. In 1989, the project got some attention and the Muppetmobile vehicle was built along with a walk-around bird character named Beak and a two-headed horse-type animal called YesNo (or, as Michael Frith noted “Yeigh-Neigh?”). The traveling group was to journey in the US and UK, teaching about culture and language. Development continued after Jim’s passing and by 1991, the project had been narrowed down to 65 two-minute shows for transmission in Japan by NHK. While the Henson team clearly believed that this venture was worth pursuing, by 1992, they had moved on to other things. The Henson Company, however, has worked with Sesame Workshop in the ensuing years on their projects in this area. 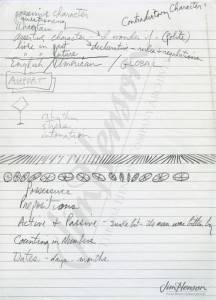 Jim’s notes from the July 1985 meetings about the EFL project. 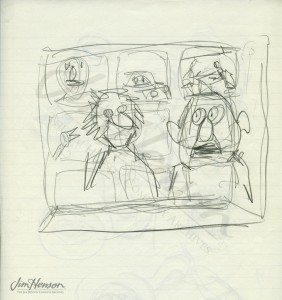 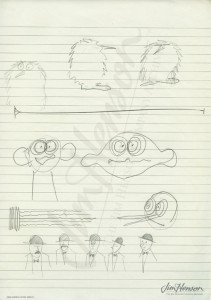 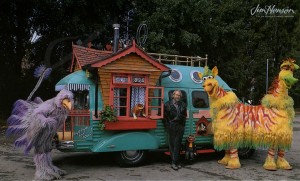 Jim and the MuppetMobile promoting the English as A Second Foreign Language project, 1989.