By 1973, the renowned make-up artist Dick Smith was doing extraordinary things with latex materials for prosthetics and special effects. This did not go unnoticed by Jim who had experimented with soft foam heads for the human characters in his Muppet Musicians of Bremen project the year before and was eager to expand his technical repertoire. Jim made arrangements to meet Smith and traveled to his home in Larchmont, NY with puppet builder Bonnie Erickson. She had been instrumental in the Bremen explorations and had started carving foam, eventually making caricature puppets of Jim, Frank Oz and Jerry Nelson, and shortly after, a very glamorous pig. Bonnie remembers that on that visit, she saw Smith’s possessed, spinning Linda Blair head from The Exorcist sitting in the center of his dining room table. It is now on display at The Museum of The Moving Image in New York along with other examples of his genius.

There was a small community working in these areas at the time, and Jim enjoyed making connections and sharing information. Jim consulted with Smith in 1978 as development started on The Dark Crystal, Jim’s first major project to use foam latex. It was through Smith that Jim then came into contact with Stuart Freeborn, the person credited with the creation of Yoda for George Lucas. Wendy Midener, the designer and doll maker then working on early versions of Jen and Kira for Jim, spent some time helping Freeborn with Yoda and, in exchange, Jim’s group learned some of the tricks of working with foam latex. Yoda is also on display at The Museum of The Moving Image.

Jim and Smith maintained their relationship, and in 1985, when Smith read about Jim’s work on Labyrinth, he wrote encouragingly to Jim, “I hear that your use of mechanical instrumentation is breaking new ground.” Smith asked to be allowed to share some of the things he learned from Jim about mechanical and radio control though a special-effects make-up course he was developing. He went on, “It may interest you to know that Fozzy Bear was an important inspiration eight years ago in the development of make-up ‘chango-heads’. I told Rick Baker about the use of syringes as pistons to work Fozzy’s ears. That led Rick to experiment with syringes. Some of the man-to-wolf puppets have employed them but, more important, they inspired a new effect concept.” And, further illustrating the connections among these innovative artists, Rick Baker’s recent work on the alien creatures in Men in Black 3 is also currently on exhibit at The Museum of the Moving Image.

Learn more about Dick Smith, Stuart Freeborn, and Rick Baker at The Museum of the Moving Image in Queens, NY. 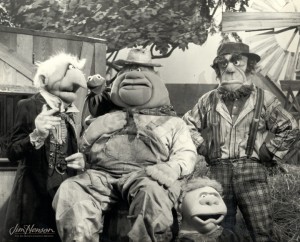 Foam-headed characters from The Muppet Musicians of Bremen, 1972. 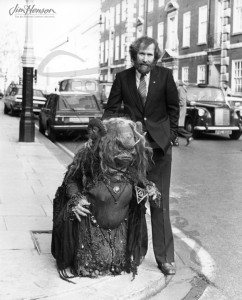 Jim and Aughra from The Dark Crystal in London, about 1981.