Deep into the shoot for Labyrinth during the summer of 1985, Jim had the opportunity to attend a major music event featuring his star David Bowie — the Live Aid concert at Wembley Stadium outside London (simultaneously presented with a concert in Philadelphia). Live Aid was a follow up to the release organized by Bob Geldof and Midge Ure of a recording of “Do They Know It’s Christmas” to raise money for famine relief in Africa. The incredible success of the single inspired the ambitious concert plans which included the venues on both sides of the Atlantic linked by satellite and multiple musicians. A highlight was a duet between Bowie in London and Mick Jagger in Philadelphia. In the end, technical difficulties made it impossible for the two to perform live in real time together, but with pre-recording and video, they were able to make a substantial contribution to the event.

Earlier in the day, Jim had taped portions of the script for The Muppet Show arena show, and during the next few days, filmed the bog and bedrooms scenes for Labyrinth. Jim’s children Cheryl and Brian were already working on the film and John came over in June. His youngest daughter, 14-year-old Heather, came over from New York that second week in July to spend the rest of the summer with him. Her cousin joined them in August, and they saw the Glyndebourne Opera’s performances of Sendak’s Higglety Pigglety Pop and Where The Wild Things Are. They went out to Stratford-upon-Avon, Shakespeare’s hometown, and then joined by Lisa Henson, spent an August weekend ballooning in France. On the weekdays throughout the summer, Jim plowed ahead with Labyrinth, finishing up on September 6th. 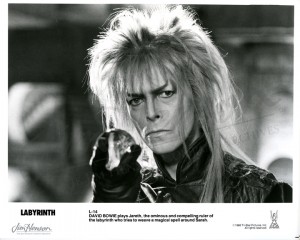 David Bowie as Jareth the Goblin King in Labyrinth. 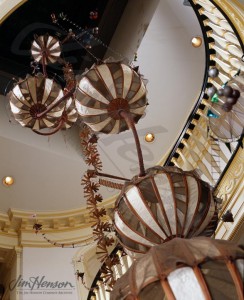