Jim was busy in the summer months shooting a movie or episodes of The Muppet Show or developing new projects. He usually made time, however, for the Puppeteers of America’s annual festival. It was an opportunity to connect with fellow artists in the field and, in the early years, to recruit new talent to the Muppet team. The 29th annual festival was held at the Di Lido hotel in Miami Beach from June 29 – July 5, 1964. Jim attended with his wife Jane who took advantage of some of the workshops offered. She made notes in her program indicating that she was interested in character development and the role of the hero in story. Perhaps she attended Martin Stevens workshop on script writing or his offering later in the week focusing on directing and rehearsing. Other participants learned how to construct puppets at workshops featuring different materials like celastic, fiberglass, and string.

There is no doubt that both Jim and Jane would have enjoyed many of the performances offered and may have attended screenings of various puppet films. Rufus and Margo Rose, best known for their work on Howdy Doody, did several shows during the festival and would become close friends of the Henson family. An array of performers including Lewis Mahlman, Jan Falkenstein, and Fritz Holzberlein offered shows with all types of puppets – marionettes, finger puppets, and shadow puppets. Jim did not perform or teach at this festival – having been President of the P. of A. the year before and responsible for organizing the 1963 festival, he was probably content to be a spectator. He did buy an advertisement in the program, sending greetings from Rowlf who was enjoying stardom on The Jimmy Dean Show.

Learn more about the Puppeteers of America. 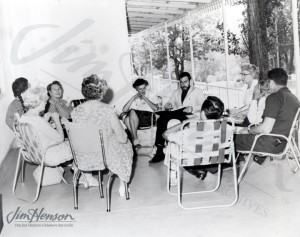 Jim at the 1963 Puppeteers of America festival. 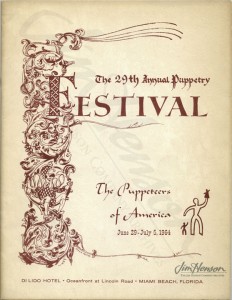 Program for the 1964 Puppeteers of America festival. 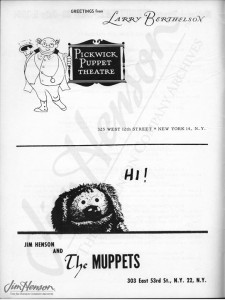 Rowlf’s greetings in the 1964 Puppeteers of America festival program.