While the 96 episodes of Fraggle Rock were written and directed by a number of people, Jim and his head writer Jerry Juhl recognized that first impressions were important and took special care with the episodes that would air first. Both the series’ introductory show “Beginnings” and the second show to air, “Wembley and The Gorgs,” were written by Jerry Juhl and directed by Jim. Fraggle Rock had already been in production since March, so when Jim went up to Toronto that July to direct “Wembley and The Gorgs”, it was the eighth episode to be taped. “Beginnings” was taped tenth, benefiting from a now experienced cast and crew.

Jim had already directed two episodes of the show, but he would have wanted to be on hand for “Wembley and The Gorgs” as it was the first time the story focused on the giant Gorgs and would be their introduction to the viewing audience. These characters were a complicated combination of animatronic radio controlled puppetry and large puppet suits, and Jim would have wanted to make sure they came off believably without the technology distracting from the story. Each Gorg (Ma, Pa and Junior) required two performers – one inside the puppet suit making the large movements, and a second puppeteer controlling the facial features via radio control and providing the voice. For Junior Gorg, for example, Rob Mills moved around on set in the suit while, simultaneously, Richard Hunt read the lines and puppeteered the face with his hand in a mechanism called a Waldo that captured his motion and transmitted it in real time to the puppet.

In order for Mills to see, Henson workshop wizard Faz Fazakas developed a system called “Gorg Vision”. Small cameras in the eyes of the Junior Gorg transmitted an image of what he was seeing to a small television monitor within the costume. This was different from the system that Caroll Spinney has used since 1969 for Big Bird. In that puppet, the image is transmitted from the television camera facing the set, and Spinney sees a view of what the audience sees. Given that he performs both the head and body and is responsible for the eye focus of the character (unlike Mills), it is important for Spinney to get that view. With the new remote system for controlling the eyes and face created for Fraggle Rock, it was more important for Mills to see where he was going in the ungainly costume and leave the eye focus to Hunt. Despite the complications, it worked well and audiences were fully engaged with Junior. Directing the episode, Jim was assured that the Gorgs worked and would integrate into the world of the Fraggles. 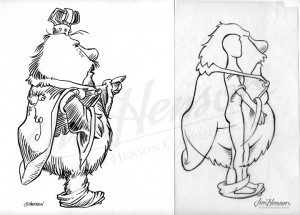 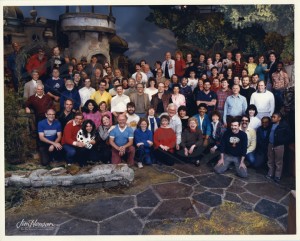 The Fraggle Rock cast and crew.