Sesame Street has won dozens of Emmy awards over its 43 year history, starting with the award for Best Children’s Series for the first season. The work of Jim and his team was and still is a major factor in the success of the show, and Jim was naturally pleased when the show was recognized, but he got particular satisfaction when The Muppets were specifically honored. For the second time, in 1976, the National Academy of Television Arts and Sciences presented an award for Outstanding Individual Achievement in Children’s Programming to The Muppets of Sesame Street. Jim was in London at the time of ceremony in May which could account for his recording the honor in his journal a couple of months later. The Sesame Street Muppets and the meticulous work in costuming and design from Jim’s workshop has received more than sixteen Emmy awards over the years, and the Henson workshop continues to get nominated practically every year. 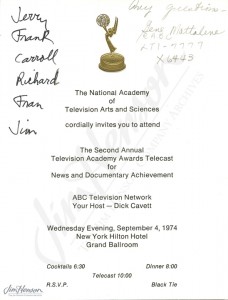 Jim’s invitation to the Emmy ceremonies in 1974. 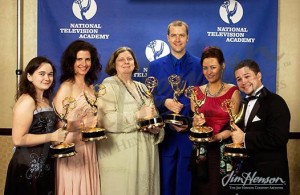