On the same day that Jim started keeping his journal in the small, cloth red book, he also became the owner of a Great Dane puppy named Troy. There were always plenty of pets in the Henson household, and Troy was one of several dogs in Jim’s life over the years. Some of the Henson pets had patriotic names – there was a cat named George Washington and dogs named Yankee Doodle and Dixie. A dog called Loki was named for the mischievous Norse god. Clearly, Jim enjoyed the personalities of his dogs – he created numerous dog characters over the years starting with Rowlf and Baskerville in 1962. They were followed by Rufus, Rover Joe, Foo Foo, Barkley, Sprocket, Ambrosius, the Bunny Picnic dog, the Storyteller’s dog, Jo Jo, and, in his tour-de-doggy-force, all of the denizens of Jim’s 1989 show Dog City.

See behind the scenes of Jim Henson’s Dog City. 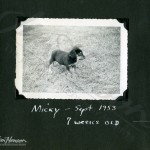 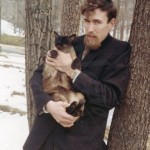 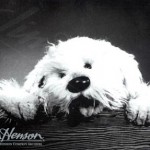 Rufus first appeared in 1964 in The Land of Tinkerdee pilot. 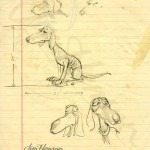 Michael Frith’s design for Rover Joe for The Muppet Musicians of Bremen, 1971. 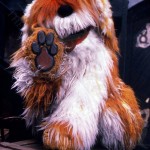 Barkley on Sesame Street, developed in 1978. 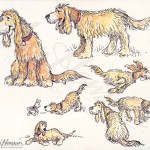 Diane Dawson-Hearn’s dog design for Tale of The Bunny Picnic, 1985. 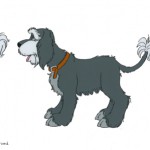 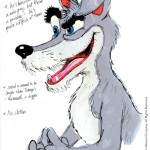