When Sesame Street was in development, the creative team debated where to set the show. Jon Stone lobbied for a realistic location that their target audience could relate to – an urban street. The evocative set, designed with great care by Charles Rosen (who had worked previously with Jim and Stone on their Cinderella projects), featured a New York brownstone, an empty lot for Big Bird’s nest sheltered by discarded doors, a place for street basketball, and a small row of retail establishments. Despite its slightly run-down appearance, viewers saw that Sesame Street was a happy place, with flowers in the window boxes, hardworking community members, and a sense of caring among its residents.

With experience in theater and film, Rosen filled the set with realistic details, warm colors, and a variety of areas that connected together in a workable fashion. It’s not surprising that the centerpiece, the brownstone at 123 Sesame Street with a stoop perfect for congregating, would inspire the many product designers that transformed show elements into toys. Some of the earliest toys featured the iconic façade, and in 1974, Children’s Television Workshop collaborated with Fisher Price to create a playset featuring the house and many of the people and Muppets portrayed on the show. Part of their “Little People” series of toys, it was an immediate success and a popular toy for years. Fisher Price and other companies made various products featuring the brownstone over the years, and in 2009, for the show’s 40th season, a special anniversary edition of the Fisher Price playset with updated figures was introduced to a new generation. Along with its signature lamppost, the brownstone set is so clearly symbolic of the show that the parade float version is greeted with a roar of recognition as it heads down Broadway towards Macy’s every year on Thanksgiving Day.

Learn more about the Muppets and Fisher Price. 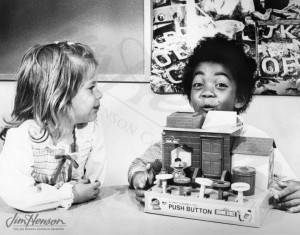 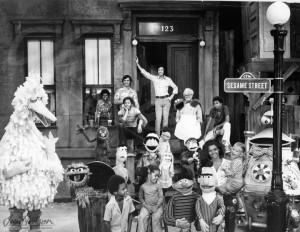 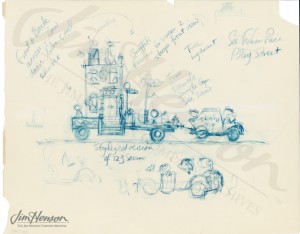