From the start of his career, Jim followed advances in television and film innovation, experimenting with computer generated images and new video formats as the technology became available. In 1986, he appeared in a print campaign for the new Mitsubishi 2053 Monitor/Receiver with full-square Diamond Vision picture. As payment, Jim was pleased to receive one of these new television sets. Things were moving quickly on the TV front. His short trip to Japan in 1988 may well have been specifically to see the latest for television – high definition. He was convinced that HD technology was the future. In a 1989 presentation at the American Film Institute on Los Angeles, he was asked about what format he was shooting on at the time. He said that he was still using 1” videotape but that for the digital animation and backgrounds he was trying at the time, he was shooting on Beta even though, “…the post-production houses aren’t geared for it yet.” He went on, “The technology of television is certainly changing, evolving all the time, and I think we are getting closer to the blending of the electronic and the movie picture. Certainly, that will happen fairly soon with the high-definition and so on.” 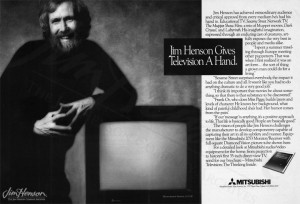 This entry was posted in 06-June '88, 1988, Appearances and tagged American Film Institute. Bookmark the permalink.