Starting with his involvement with the Sesame Street Ice Follies show in 1975, Jim’s characters appeared many times in large sports and events arenas. For each version of each show, Jim and his colleagues recorded all of the scripts for the full-body suit performers to skate or dance to. Among other pleasures, these performances gave Jim a link to another major artist, Charles Schulz, creator of Peanuts (whose books took up half a shelf in Jim’s library). Performer Judy Sladky appeared skating on ice as Ernie in the Sesame Street shows and also performed on ice as Snoopy in the Peanuts ice shows. Through Judy, Jim and Schulz sent greetings back and forth although it does not appear that the two men ever met, despite their mutual admiration. Judy also performed on television as Sesame Street’s Baby Alice Snuffleupagus. 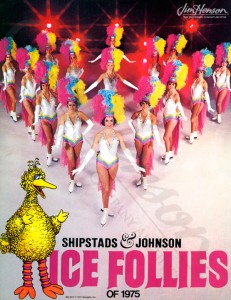 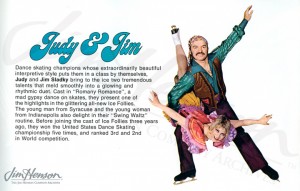