Almost immediately after its 1969 premiere, Sesame Street was considered a success on several levels. Not only was the show getting big audiences and lots of press, but it also seemed to be reaching its educational goals. The first impact studies just months after the debut indicated that there were (according to the Children’s Television Workshop Newsletter), “…substantial increases…in the experimental groups’ ability to solve simple logic, sorting, classification and enumeration problems.” A year later, Nations Schools magazine said, “If kids act smarter, Sesame Street may be the reason.” And a report from the Educational Testing Service at the end of 1971 said, “The new study tended to support first-year findings that the program was effective in imparting basic facts and skills in children aged three to five. It further showed that children who watched most learned most, a pattern established in the first- year study.” These kinds of results would certainly encourage an attempt at additional shows with different goals.

CTW launched The Electric Company in 1971 for school-aged children, and the following summer, began exploring a concept for a third show, also aimed at 6 -10 year olds. From June 14-16, 1972, Jim attended a meeting at Arden House, an estate in Harriman, NY used as a conference center, organized by CTW to discuss (according to the meeting report), “…a projected program series treating the emotional development of young children.” The production staff was hoping, at this meeting, to focus on just a few topics in depth in order to produce four to six taped test pieces. There was concern, however, that, “what a poor child may need to get along better with himself and others or to resolve conflicts may run counter to what a middle-class child needs” and that they could be, “…accused of indoctrinating children with values decided on by CTW staff.” The consensus was to, “…provide universal values and to avoid a propagandistic approach.” Academic experts spoke about moral and ego development, self-esteem and pro-social behavior, and the group looked at existing Sesame Street footage and a film Jim made in 1962 promoting good decision making relating to traffic safety. The report described animated discussions on the format of the show leading to the concept of a “family mood with characters, probably puppets, who encounter situations that call for different types of personality or emotions.” Using the group dynamic of Pogo and Peanuts as an example, they decided that specific individual personalities taken together would provide an integrated message.

Jim took detailed notes, doodling ideas and suggestions. On July 14th, preparing for the second meeting planned for July 19th-21st, he taped two pieces (described in his journal as “poor”) which he had written. The first, called “Sulfuric Cake” was about miscommunication and ended with a cake in the face. The second, called “Dilemma” related to honesty and taking responsibility for one’s actions and failed to come to a full resolution. In-house correspondence indicated that Jim was excited about this project, eager to be involved with the production, and he took a big group up to the July meeting including Jerry Juhl, Frank Oz, his producer Diana Birkenfield, Jane Henson, Joe Raposo and others. CTW’s Gerald Lesser provided those attending with an overview summing up the basic concept: “The show is a new experiment…in whether television can be used to increase a child’s psychological awareness of his own thoughts and feeling as well as [those] of others.” Apparently, a decision was made to abandon the project as Jim made no further mention of it and no programming was produced. Some of the ideas from the show resurfaced in 1983 when Jim began developing his never-produced show, Starboppers. 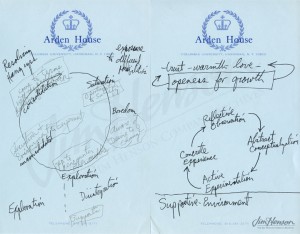 Jim’s meeting notes from the 1972 meeting about a new Children’s Television Workshop show. 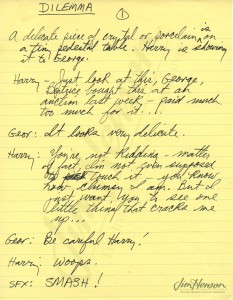 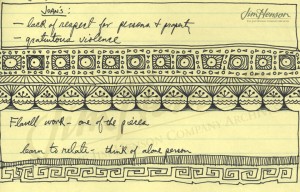