After testing the waters by taping two episodes of The Muppet Show in January 1976, Jim and his colleagues set off for London to tape the other twenty-two episodes slated for the first season. To mark the true start of a project that had been percolating in Jim’s head for more than fifteen years, Jim decided to travel in style, taking his creative team trans-Atlantic on the ocean liner The Queen Elizabeth II. It was a celebratory gesture, but also a practical move. During the days at sea, the group could work uninterrupted, developing material and planning for the season. By day, the writers wrote and the producers planned. Evenings meant relaxation with visits to the various bars around the ship and parties in the cabins.

It worked out so well that Jim also traveled by sea the following year for season two. They were treated royally – until they landed, that is. On the 1977 trip, according to writer Joe Bailey, there was a dock workers strike and passengers were required to unload their own luggage. For the Henson team, that meant not only unloading their own suitcases but also all five tons of Muppet freight that accompanied them. With hand trucks and dollies, Jim and company carted boxes laden with puppets, props, and costumes from the ship through customs to the studio’s trucks prepared for them on the other side. Once the hold was empty, they collapsed into the limousines waiting to take them to London.

In 2003, the Muppets again boarded The Queen Elizabeth II, traveling the reverse trip from Southampton, England back to New York. This time, it was Dave Goelz and Jerry Nelson doing the work, performing their characters for the other passengers. They were joined by long-time Henson producer Martin G. Baker, who presented a documentary about Jim and discussed his experiences with the Muppets and puppet-builder Jane Gootnick who demonstrated her craft. The crossing was part of the farewell season for the ship before she was retired. 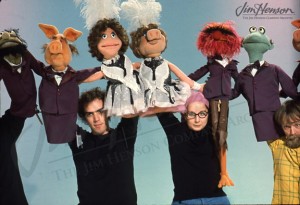 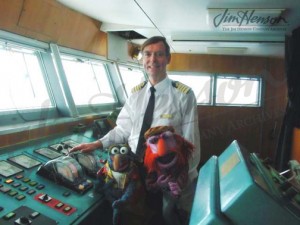 Floyd and Gonzo visit the captain on the Queen Elizabeth II, 2003.