While directing Labyrinth in London, Jim used his weekends to attend to other business, traveling to New York for meetings on various projects like Little Muppet Monsters or to record a script for The Muppet Show Live tour. Returning on an overnight flight, he was back in the studio Monday mornings. Some weekends involved a more relaxed get-away, ballooning in France or visiting friends in the English countryside. A trip to Paris included shopping for decorations for his new Manhattan apartment in the Sherry Netherland Hotel. He sought out animal-themed items, including several antiquities, and purchased a snake-stemmed torchiere lamp by the Art Deco master, Edgar Brandt. He placed it in the apartment before an intricate elevator door also designed by Brandt.

Read about the Labyrinth shoot.

Learn more about Jim’s Manhattan apartment at the Sherry Netherland. 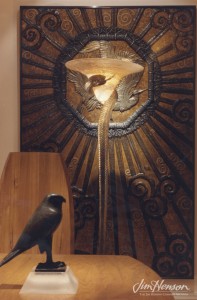 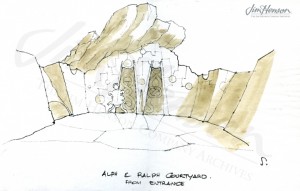 Elliot Scott’s set design for the Alph and Ralph scene in Labyrinth. 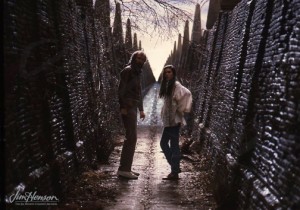