As popular entertainment celebrities, Kermit the Frog and Miss Piggy have been guests or hosts on a variety of programs featuring both popular and high-brow culture. Given Jim’s special relationship with public television through Sesame Street, he was always happy to have his characters, both from Sesame and from The Muppet Show, appear on their broadcasts. Jim’s how-to special The Muppets Make Puppets aired on PBS affiliates in 1968. Ten years later, Kermit and Fozzie promoted the Macy’s Parade in a PBS special called Hip Hip Parade! In 1979, Ernie, Bert, Kermit, Miss Piggy, Grover and Cookie Monster helped out during a PBS fundraising marathon. The World of the Dark Crystal documentary aired on the network as did Jim’s program celebrating the 1980 international puppetry festival, Here Come The Puppets. Another fundraiser, in 1983, featured Statler and Waldorf, and PBS aired numerous Sesame Street specials over the years.

The material that Jim taped in May, 1985, was an introduction for the Great Performances: Dance in America broadcast of the San Francisco Ballet’s “Cinderella” that December 7th. The previous October, Great Performances producer Judy Kinberg, inspired by Rudolph Nureyev’s Muppet Show appearance, sent a telexed invitation to Jim and Frank Oz, asking for their participation in the 90-minute special. A few months later, Jerry Juhl met with her and reported back to Jim his positive reaction. He said that, “All the people connected with this project are genuinely excited to have the frog and the pig. They are fans!” Further, “Michael [Smuin, director and choreographer] is not the least bit worried about us being irreverent towards his ballet.”

During the program introduction, from their box seats, Kermit dutifully explained the storylines and the characters while Miss Piggy rooted around in her handbag for a mint. She then offered Kermit a chocolate drop and, just as the conductor appeared, a sandwich. At the intermission, the camera pulled back to reveal that Kermit had ordered a bottle of wine for the two to share. In her enthusiasm for the ballet, Miss Piggy, dancing around the box, knocked the wine over the railing and started an argument with the people below, only quieting when the lights began to dim. At the second intermission, when Kermit admired the dancer performing Cinderella, Miss Piggy banished him to the back of the box (despite her description of the Prince: “Let’s face it, he’s a hunk!”). At the end, Kermit and Miss Piggy bantered as the dancers bowed and thanked the audience. In an interview distributed with the press kit, Miss Piggy was asked when she first became interested in ballet. Her answer: “When I realized that you could watch people exercising without having to do it yourself.” 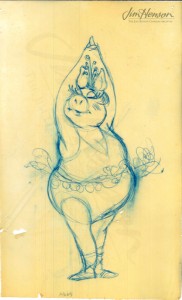 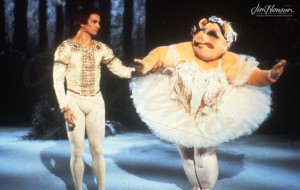 Rudolph Nureyev on The Muppet Show. 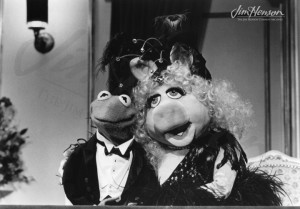 Kermit and Miss Piggy in their ballet-going finery.